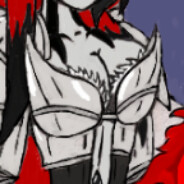 Years of Service
450 XP
The Goddess is always watching.

⬇Some cool music to listen to down below⬇

Interests: I like Anime, Movies, Music, Video Games, TV(certainshows), World History, Natrual History, Science, Animals, and I like doing certain things outside from time to time.

Height: 10.5 feet compared to the in game characters.

Wingspan: 30 feet from wingtip to wingtip.

TailLength: 15 feet from base to tip of blades at the end.

Abilites: Eva will be able to hover around above the players and drop down on thier heads at will. She can only do this for a limited time until she can do it again. Eva is not very prone to knockback, esspecially from sentries, rockets, grenades, stickybombs, sniper rifles, scattergun, miniguns, all melee weapons, or the force of nature. All of these things will deal minor slowing in the bosses movement speed.

Movement: This boss will move around with the speed of a sniper or a pyro and jump very high in the air aside from her hovering capablities.

Melee: Eva will use her palms to attack with along with a kick with an alt click of the mouse. Each strike will kill most classes in one hit.

Special Attack: Using the rage points she gets from being attacked, this boss can throw out pike shaped red energy forms at the intended targets. the most she can throw out before she runs out is 4. Each of these will kill any class in one hit. They can be used while hovering.

Rage: Upon getting rage, this boss will become immune to all attacks until the short period of time is up and the effect will stun nearby attackers for alittle bit .She will be able to fire a single but powerful missile like energy attack that has a very wide, almost nuclear blast radius when it explodes and moves with the speed of a Direct Hit rocket. This rage attack will instakill any class. The rage can even be used while hovering.

Other notes: Things like Arrows, Crossbow bolts, and any periceing effect on the model will be taken away as it does not make logical sense with the character. backstabing will be seen as just "hardpoking" the back and dealing high critical intolernace on the meter used for the boss. She will be immune to afterburn and bleed effects because she is not flamable and does not have blood. Also any enviromental objects that can kill other bosses will only get Eva stuck until she can move again. She will be decent on wide spread maps and very strong on enclosed maps. Certain !rtd effects won't work on her.