This user has also played as:
Lord Wolf Years of Service
500 XP
Shut in weeb
I'm straight edge, that means I'm better than you!
I pride myself on being a jerk because I am brutally honest all the time

I'm Awesome!
I came to play

also if you do drugs piss off you are a disgusting pathetic human being!
(YES SMOKING AND ALCOHOL IS A DRUG TOO! SO DON'T ACT LIKE THATS OK, CAUSE IT'S NOT!)

God i hate these pathetic childs who just made a group to insult via the group invite.
i mean seriously how pathetic are you to make a group just to insult someone?
you got really no life kiddos and maybe, just maybe someday a single person will like you
(but there is just a very small chance so don't have to much hope in it)


I don't say kill every stupid person, i just say remove all warning signs and let the problems handle themself.

So probaly this is why i always get used and screwed by others, because I am always honest and open with them. i always tell the truth and as reward everyone just uses me. but i refuse to play the game like that. I'm against that and won't lie or act like I am something different. i stand behind what i say and even if i get screwed more i will continue to always be honest.

Also i hate it if someone silent removes at least say why. and btw don't just remove others IF you got a problem with someone call the person out for that, confront him with the problem and talk about it! maybe it was just a misunderstanding and you just thought he meant something different than he said. always ask first for a explanation for what someone did/said and talk about things. just removing isn't really a solution. (well it is but thats not mature and what little childs would do)

Just always be honest and tell the truth, i got no problem if someone tells me what he don't likes or if someone is telling me something that would probaly "hurt my feelings" it only hurts my feelings if a person lies to me whom i really trusted and called a close friend. if others lie to me then I would probaly just be dissapointed, but I didn't expected something else from this society.

Quotes
I'm rather hated for what I am, than loved for something that I'm not - cm punk

(don't think of others from your perspective and think they would act like you, cause they don't. view them from their point of view and look to their past actions to know how they will act. also question the things they do. don't just trust their words foolish)

When you tear out a man's tongue, you are not proving him a liar, you're only telling the world that you fear what he might say.

(if you just remove someone or ignore a other person without confronting him with the problem you don't prove that you are right, you only prove that he might be right with what he said.)

Power resides where men believe it resides. No more and no less. It's a trick, a shadow on the wall and a small man can cast a very large shadow - Varys

you may never have a harem but you can build yourself a harem out of dakimakuras !!!!!!!!. - "The Lunatic" Wolf-fighter (myself)

Infos
i'm a hardcore shut in and weeb. my favorite anime genre is isekai, also really like sibling incest anime xD. (well fan of medival kind of stuff so fantasy anime which is like isekai in that sense is good too )


feel free to ask everything else

Q: Can I add you for rp /erp
A: not doing that anymore . so you can add me but i will tell you ima not role playing.

Q: Do you watch anime?
A: Obviously

Also i watched mlp fim and am kinda a fan of that but the show is now dead anyways and over.


https://www.16personalities.com/profiles/57bc548c017b0 this is surprisingly pretty accurate ._.

:
you can send me money. but know that nothing will happen if you throw money at the screen. 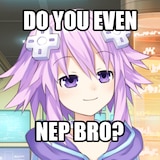 How to Nep a Nep Nep
Created by - Kuro Mewsagi

Hyperdimension Neptunia Re;Birth1
Some people might have trouble nepping, due to their lack of nepping experience. This guide will teach you how to nep like a nepping pro who neps Nep Neps every day since the early days of nepping.
Review Showcase

Terraria
1,811 Hours played
10/10 one of the best games ever. it has nearly no limits, you can do nearly everything in it. building, fighting, fishing, exploring, digging , collect stuff (for ppl who like to collect every in game item) make pvp fights (or play pvp games like capture the gem) the only thing some ppl may not like is that terraria is 2d , i personaly like it but some people need it 3d to build stuff. and to everyone who calls terraria a 2d minecraft: PLS DON'T EVER say terraria is a 2d minecraft, terraria is way more focused on the crafting and fighting. you have different classes, tons of items more. and grind... ofc you have to farm for your stuff. thats the main aspect of the game TO GO DIGGING UNDERGROUND, exploring finding stuff and mining your ores. and if you had the strong stuff in a few minutes then you would complain that you are to fast done with everything lol. notice terraria OFFERS you that you build alot stuff and that ♥♥♥♥. but the main aspect is the mining and grinding for items in this game. the only thing minecraft has over terraria is that mc is 3d. if you just want to build stuff in 3d play minecraft. but thats the only thing mc has. mc is extremly limited and has way less items then terraria and even if terraria is 2d you can still build tons of awesome stuff
Leave a comment
Favorite Game