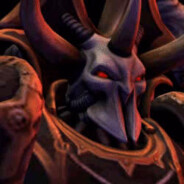 Unless you give me a good reason, I will refuse your friend request. I'm trying to keep my friendlist clean, with only people I can remember playing with.

I won't tolerate any arrogant nor toxic behaviour, and I won't consider people who can't speak English. No point in playing with someone with whom I can't communicate.

The comment section of my profile is available to everyone. If you can't leave a comment, it's either because Steam is messing up and you lost connection (try again later, it happens all the time), or because I added you to my blacklist at some point.

Dawn of War 2 (and Chaos Rising and Retribution)

I used to have Out-Of-Sync errors, but that was (mostly) fixed since I installed Proton GE 6.1, and being on Linux also makes me immune to Retribution soundbug.

If I'm leaving during a game, there are several reasons possible:
- My game crashed
- Someone did something I hate
- I just joined a friend who invited me into playing
- The host (first player in the row) picked the Anvil of Khorne map even though they don't have the gears for it

If you're glitching/walling/going out of map boundary without asking if the other players are okay with it, you're making the game much slower and annoying. And if you're doing it without the proper wargear, then it's worse because then you're watching the others doing all the job. Chances are I might just leave the game and block you.
View more info
Currently Online
Badges  38

Clockwork Dec 12, 2021 @ 10:53am
Honestly? I don't know x) Over time, I learned to not be too hyped about things that didn't come out yet. I'll have to take a look at the trailer and see for myself