This user has also played as:
TentacleBunny – I wing my life everyday like I do with my eyeliner. TentacleBunny's Cozy Cottage - Public Group
Reviews
112
Members
10
In-Game
36
Online
6
In Chat
"Everyone has a chapter they don't read out loud." 🌸
It is sad that I even have to mention this but I wish to stay away from toxicness and all sorts of drama. I don't know about other people but I am on Steam to play games and share my passion with other friendly people, if you're not among them please refrain from adding or contacting me as any form of toxicness will result to a block. That being said, feel free to add me when we have anything in common or you're active in the feed.

Please leave a comment on my profile for the reason you are adding me for an increased chance of me accepting the friend request. I might not accept if we have nothing in common.

Feel free to follow my Curator Page If you enjoy reading my Reviews!

– I didn't think that I fit in her world,
me, a guy who is stuck between two lives
and always carries the danger of the wolves with him.
But that moment, when she called my name
and waited for me to follow her,
I knew I'd do everything to be able to stay by her side. ㄨ♡ㄨ♡

Wanna be with you, you tonight.
Yeah no more playin’
Cool, cool, you and I
Moisten my thirsty heart, all right
Give breaths into me
My life without you is meaningless
Please accept me and let me love you"


My Passion
• Dramas in progress [mydramalist.com]

Agent Of Love
12.6 Hours played
Let me start by saying that I was slightly worried at first when I read the mature content description of Agent of Love on the store page. Whilst this visual novel is indeed on the darker side, don't let these tags discourage you from giving this game a try — I ended up absolutely enjoying this title.

As an important piece of information, only the prologue and first chapters of each character are free to play. If the player wishes to see the full story, and additional content, it's required to purchase them. Each character has their own main story, his POV, epilogue, and the secret end chapter that are buyable in-game.

Due to the character limit, I had to trim my review. However, feel free to check out my review for the recent release of Takasuke Hiraishi's "His POV" story here.

An Agent of… Love?
Agent of Love opens with a prologue that introduces the female main character, as well as the male love interests. The protagonist is working as a detective and from a decent family with her father being the police chief commissioner of Japan. However, nothing is as it seems at first glance and she was actually adopted. Thus, there are a lot of problems she has to deal with, not being the legitimate daughter. Anyway, one day her life gets completely thrown off when she gets closer to a guy.

The Execution of the Story
Let me start by saying that I ended up getting surprised. Never have I expected Agent of Love to contain such a well-executed story. Well, I should actually say stories as every love interest has his own plot that is entirely different from the others. I found myself getting curious about what the next route has to offer to me and ended up loving each of them. Whilst I preferred some routes over other ones, which is only natural, I am impressed by the story they tell. Of course, there is still a lot of romance implemented, yet Agent of Love also manages to deliver an unforgettable experience with its storytelling. After all, romance gets spiced up with a lot of action.

The Cast
As a side note, I will update this review with more characters getting added in the future. As every character's route is entirely different, I decided that I will comment on each character separately.

Main Story, His POV, Epilogue and The Secret End Chapter
Note: Ayumu Kitagawa and Kouhei Takeuchi have no available chapters to purchase as of now.

Let me start by saying that, in my opinion, every story is worth purchasing if the reader enjoyed the main story of a certain love interest, although the rest are entirely optional. It's important to mention that the "His POV" chapters only follow the same plot as the main story, however, with the perspective of the love interest. I never had the feeling that the chapters felt too repetitive but it helped me to understand the intention of each male character better. Additionally, they're containing ten chapters whilst the main stories contain slightly over twenty. The epilogue only contains three chapters while the secret end has one.

For the main story, there are three different endings available which are: A bad, normal and happy one. Even when the player is not able to reach the happy end, it's possible to go to the chapter selection and just choose what ending they want to experience. I found this was a nice feature as this game only supports no manual saves. Luckily, it saves automatically so I could quit the game any time and go back to it, continuing the scene without having to replay anything.

Graphics and The Immersion
Graphics-wise, Agent of Love is lovely. I liked the design of the characters, although the heroine is faceless. This, however, didn't bother me a lot as she is only visible in CGs. Anyway, something I didn't like was that the backgrounds looked off, being blurry. This issue sadly does affect some of the CGs as well.

In addition to that, there is even the option to make the font bigger — and it even works splendidly in this visual novel without cutting off any words, which sadly often happens for games that offer larger font options. Unfortunately, the game doesn't contain any voice-acting which would have enhanced the immersion. However, it does implement charming tracks and sound effects.

So, what do we have in the end?
It was a while ago when I last played an otome game with splendid and captivating storytelling like Agent of Love. Whilst this visual novel focuses on the plot a lot, it also throws in a lot of romantic scenes and I couldn't help but feel all giddy inside during scenes where the love interests truly care about the heroine. It does help that Agent of Love offers its reader a strong female lead who may be stubborn but is just the kind of person I need in these kinds of games. That being said, I cannot recommend Agent of Love enough, so do yourself a favor play this otome game right away if you're a fan of the romance genre. 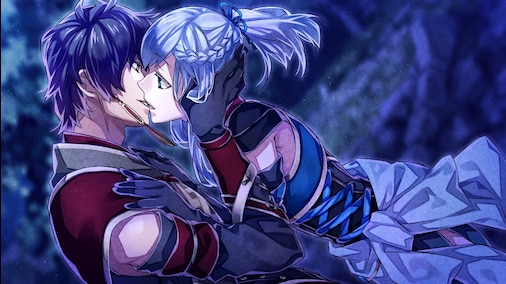 Have a nice Weekend my friends