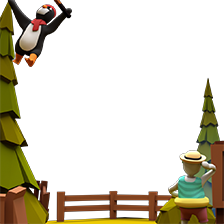 Recommended
5.9 hrs on record (5.5 hrs at review time)
The unique way in which the game is set up creates a strong platform for further development which in turn leaves you imagining the possibilities and leaves you gasping for more content!

> The gameplay consists of two parts:

- In the beginning, the game starts off as exploratory which is a unique experience by itself. Where you can explore what the game has to offer in terms of music, visuals, and interaction with content. This exploration then encourages you to lead down a linear path of objectives to unlock the shooter game. This exploratory part lends background reference to what the game is and what you are doing in the game. This part is mostly not NSFW apart from a few possible mildly NSFW text interactions.

- The next part is the shooter game which is a never-ending, top-down survival mode where you try to shoot down the enemy and avoid taking damage from enemy fire/collision. You also pick up power-ups along the way. The intensity of the enemy attack keeps increasing as you go further. Multiple NSFW animated backgrounds appear in the background while you make progress. But the shooter game with no boss fights or levels is basically a fight for the leaderboard.

> The entire gameplay is based on the mouse left click button and mouse movement.

> The game has nice features such as:
- its unique exploratory + shooter combo
- The hitbox collision mechanics are on point and the mouse response to movement is very reliable
- A seamlessly integrated leaderboard
- Auto-saving of game progress and ability to continue from the last progress you reached
- The way the game nudges you towards your objectives without explicitly directing you

> Achievements: Half the achievements are related to exploring the game which are very easily achievable. The other half are based on how you perform in the shooter game where you earn achievements for high score and combos. The high scores are difficult but achievable but the combos test you a lot. 100% achievement is very much possible in this game.

> Music: The exploratory part and shooter game both have their own separate music with the former having a variety of options to choose from and the latter being powerful electric guitar chords with drums. Sexy voice lines within the shooter game are an added bonus and something to look forward to.

> UI: Solid and efficient. The UI does a good job of guiding the player to help them achieve their objectives. It may not be very stylish but it gets the job done as intended.
Posted May 14. Last edited May 14.
Was this review helpful? Yes No Funny

Recommended
20.5 hrs on record
Made with a lot of love
Posted October 28, 2020.
Was this review helpful? Yes No Funny

Not Recommended
4.8 hrs on record (1.2 hrs at review time)
Early Access Review
At the start of the game you are given a choice: Surrender to your fate.. or Escape! If you pick the former you will be saved from having to play this tragedy of a game.

Gameplay:
>The game has nice features such as:
-three unlockable difficulty modes
-auto-saving of game progress and ability to continue from the last level you reached
-some storyline at the start
-tutorial for controls at the beginning
>But the game fails miserably at gameplay so much so that it totally justifies its title. The hitbox collision mechanics are horribly ultra-sensitive and levels are badly designed in the name of making the game difficult so much so that having cleared just level 1 and feels like its an achievement.
> If only the developer had designed the game to make it more playable.....you might have been able to explore the additional in-game mechanics such as reverse gravity and ability to shoot.
>The object of each level is the same which is making your way through the traps to the end without idling much.
> Unlimited lives. But each time you die you start the level from the beginning.
>The entire gameplay is based on the arrow keys.
>The game claims to have 30 levels.

Gameplay:
>The object of each level is the same which is making your way through the door before time runs out while avoiding traps along the way.
> The challenging part is you only have 3 lives unless you pick up additional extra lives along the way. And when you run out of lives you have to start over again from the start of the stage and not from the start of the level you last reached.
>The game features gravity reversal, escalators, spikes, portals, etc.
>The entire gameplay is based on the arrow keys.
>The game is divided into four stages with each having ten levels, You need to clear one stage to be able to unlock the next stage

Achievements: Except for one all in-game achievements need you to be able to beat the game.

Gameplay:
>The entire gameplay is based on just the left and right arrow keys.
>The game is literally unplayable as the trolley movement is erratic and laggy while the falling objects fall at great speed and change direction when they hit obstacles.
>Game play is moving the trolley horizontally to catch the falling gold and boosts while avoiding the rocks
>The trolley needs to be filled with 50% gold within the given time to clear the level
>The game has 25 unlockable levels,

Achievements: Getting any achievements at all is quite impossible as the game is literally unplayable

Recommended
6.9 hrs on record (6.0 hrs at review time)
A cross between Pac-man and Snake game!

Gameplay:
>The entire gameplay is based on the arrow keys.
>Recommend this for a good pass time.
>Game play is running away from snakes and collecting stars and boosts along the way before the snakes do and survive for as long as possible just like in Pac-man.
>If the snakes collect the stars they grow in size just like in Snake game. Snakes can be cut down in size by collecting red crosses. Snakes spawn randomly.
>The game is a survival mode where you have to survive for as long as possible.
>The game lacks levels, But each time you play the game a different track is generated.

Achievements: Perfect achievement score is quite impossible as some of the achievements are unrealistic or require extreme grinding. Has global leaderboard.

Music: Monotonous EDM beat which seems out of place from the look and feel of the game. But it gives a positive vibe

Gameplay:
>Move tiles with a mouse click and arrange them in rows/columns of three or more to make progress within a limited number of moves.
>The number of tiles increases as the levels progress.
>The gameplay is wrapped in a short insipid storyline about fulfilling wishes.
>Grinding is embedded in the storyline itself.
>There is a bonus level which unlocks when you complete the story mode.
>Tile spawn mechanics and tile matching mechanics at the end of the level are clunky.
>Apart from the story mode, there is also a time run mode.

Gameplay:
>The entire gameplay is based on holding or letting go of a single button.
>Recommend this for a good pass time.
>Game play is similar to flappy bird expect for the fact that instead of going up or down on a linear path you are rotating around a center which you either fall in or move away from.
>The game is a time run.
>The point scoring system is variable with more points awarded for being closer to the center.
>There are moving obstacles and boosts along the way.
>There are in-game skins which can be unlocked in exchange for accumulated points.

Achievements: Perfect achievement score is very much possible. Achievements are unlocked based on time run score and unlocking of in-game skins. Has global leaderboard.