This user has also played as:
Tilen Intrepid Adventurer
100 XP
Hello and welcome to my profile!

Please note: I don't vouch for any person on my friend's list!!! Selling
your items for real money, outside of Steam's trading system is your own
responsibility. If you get scammed, I can't help you with much so please report
them to Steam support and sites like steamrep.com
View more info
Currently Offline
Badges  4,060 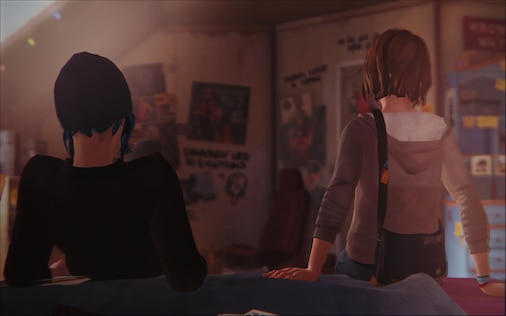 Life is Strange™
22 Hours played
TL; DR: Just play it, it's amazing!
I tried to avoid spoilers in this review as much as possible!

Life is Strange is an episodic story based and choice driven adventure game developed by Dontnod Entertainment (Remember Me) and published by Square Enix. In the game you play as an 18 year old girl Maxine (Max) Caulfield, a photography student, who returns after 5 years to her hometown Arcadia Bay to attend Blackwell Academy, a prestigious private school. After witnessing a tragic event in her school, she discovers she has the power to rewind time and prevents it…

Life is Strange is a coming of age story about a socially awkward teenage girl dealing with some (really!) heavy issues using her newly discovered power. You control Max through 3rd person perspective, interacting with people and objects. The gameplay is similar to other story driven games like the ones from TellTale Games (The Walking Dead, Wolf among us, Tales from the Borderlands,…) but with more freedom when exploring and dealing with choices, since you can rewind any decision if you are not too happy with its (short-term) consequence. Also there are no QTEs in this game. I’d rather not say too much about the story for fear of spoiling too much of it, just that Life is Strange has one of the best stories I’ve ever experienced in a game, TV show, movie or a book!

I really love how this game looks! Nice lighting effects, character animation and movement, the beautiful landscape of the Arcadia Bay, the art in pictures and photographs. Even though there are some issues with lip-syncing and in one part of the game my Max didn’t even open her mouth when she spoke (I guess she also had the power of telepathy or maybe she was training to become a ventriloquist) I believe Dontnod did an amazing job here.

Hannah Telle (voice of Max) and Ashly Burch (voice of Max’s best friend Chloe) were incredible here. You can really feel the characters’ struggle, pain, love through their acting. I really love hearing Max contemplating every choice she makes in her head, makes you truly question if it was the right one. It comes as no surprise to me they won various awards for their performances in LiS. Kudos to other voice actors as well.

Soundtrack? Ready for the mosh pit!

Well… not really.  The original score, composed by Jonathan Morali, consists of mostly soft tunes played by acoustic instruments and it fits this game perfectly with additional songs by Syd Matters, The Foals, Amanda Palmer, Alt-J… Just wow! Be it songs or background music, it’s all so wonderfully integrated into the game and they really help set the mood. I often listen to the LiS soundtrack and even though several months have passed after finishing the game, I still get the feels just by hearing some of these magnificent songs! Ahhh…

Life is Strange will heavily play on your heartstrings and chew up emotions you didn’t even realize you had, but in the end you will be glad you experienced this amazing journey. One of the best games, I’ve ever played!
View all 10 comments