This user has also played as:
Dalilah / Lily 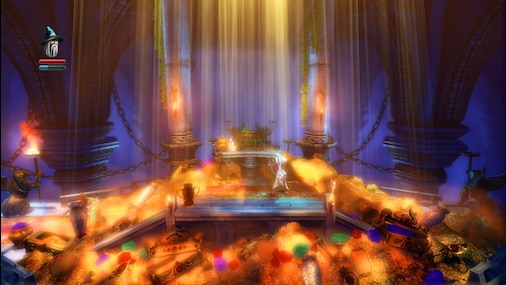 Even though I only got to scratch the surface of this game so far, I must say that I’m really enjoying it. I honestly never thought I’d come to love an rpg maker game, but Rose Portal Games gave me a new experience and new outlook on these type of games. I must say that the game’s humor and jokes are definitely its strongest segment, but I will get to that later.

I’m not sure what to say about graphics. It’s the standard pixel, rpg maker graphics. However RosePortalGames made the best of it, so they game truly looks and feels beautiful. The sceneries are done amazingly. I love how the whole town has this colorful and cheerful look, and most of the houses are designed beautifully as well (like the pink house of one of the characters). But from what I’ve seen, the game will get a bit darker at some point, so if you are afraid the game will be all sugary and sweet all the time, don’t worry. The tone of the game changes according to the story progression.
The developers of the game also did a very good job on the artwork in this game, that is the character models (when they talk to you). I presume they are hand drawn and look beautiful.

I must say that I am loving the story so far. Like I mentioned above, this looks like a more cheerful game that focuses on the comedy effects. However this is not over the top, and not at all times during the game. As the story progresses things will get a bit darker and have a slightly more serious tone. I love that there are many different stories interviewing, and so many side quests to do. But most of all, and I do believe this is the strongest aspect of this game, at least it is what made me love it) is the dialogue. The lines said by characters are quirky, funny and filled with humor that even too explicit at times. The game is also filled with various references, for example Game of Thrones references, both through dialogue and the names of some characters (and me being a GoT fan, I especially enjoyed these jokes). Now, some might find this type of humor a bit over the top and might not like it, so if you don’t there is an option in game to turn off “jokes”. Do this especially if you are letting younger kids play this game as it has some strong adult language at times.

Now I must say even though I said I love the story, that I am not truly involved with the characters yet. It might be because they are not showing any particular traits and characteristics that might define them, and thus make them likeable or make the player care about them. Even the main character is a bit one-dimensional. The supporting female character Mary, has a deeper complexity, but I’m not sure I like her contradicting personality. You will see what I mean when you play the game. I hope the more I play the more complex the characters will get, and I will be able to change this segment of the review. I will let you know of my opinion later on.

I must admit that this is the first time I have played an rpg maker game (though I have played rpg games at times before). I was not really familiar with the combat system, but it was simple enough to learn, and wasn’t incredibly hard for me to defeat opponents at the start (I am sure the difficulty raises with progression into the game)
The inventory is also very simple to use. For example when using potions, it tells you how much health it restores, and how much health the character has, so you can double check whether you want to use it or not. I am yet to try the crafting system.
Now I must say that the game is truly vast with so much area to explore. Now to me honestly, I was at times getting a nit annoyed by having to walk from one side of the town to the other doing quests, but I'm sure this is a part of many rpgs and a feature many people like. Who doesn’t like questing right? However, I’m still getting used to this kind of a thing. Though it is a bit more noticeable here as it is at time quite difficult to walk since the character can get stuck due to tight spaces (through forest for example) or blocked parts of the scene (where the town ends for example). So I suggest using mouse for walking and determining where to go instead of keyboard keys. I also noticed that even though the game has an fullscreen option it does not look good at all in fullscreen, but this might be due to the rpg maker engine used to create the game. I still hope it can be fixed in the future.
One more thing I must say I loved was what I consider a small bonus, collecting coins from time to time as you go about your way and exploring. I really like that.

This game probably has some of the most beautiful medieval music I’ve heard play in game. I found myself turning the volume up quite often. I could probably listen to it for hours.
All in all I am very intrigued and invested in this game right now and can’t wait to play more of it and see how the story progresses. I love it so far, especially all these quirky jokes and the art style and will keep on playing it.
This review will be updated as I play more or when I finish the game.

Spring Clouds™ May 21 @ 3:40am
You called me OCD on my profile 17 months ago & now i want to appreciate you for last time. Liking number 7 was just a hobby to me that i could increase my motivation to smile all the time. It's not matter if i will not be 77 months older than you (joke). Enjoy Gaming! 🎮