Mountain Village
A small village high in the mountains, surrounded by rocks and a variety of landscapes and tight corners.

The village itself is surrounded by a mixture of forest and open plains, in addition to some outlying buildings. It is recommended to play this ma

Getting Over It with Bennett Foddy
14.6 Hours played
Getting Over It appears, at first glance, to be a meme game - a game with deliberately poor design, made to elicit frustration. In a way, it is - but at the same time, also much more than that.

To be clear, some of the prejudices around this game are absolutely correct - it is very difficult, extremely frustrating and it will probably make you want to uninstall it more than once. The controls are very awkward to use and the map is designed in such a way as to ensure that failure is inevitable. If you do fall you get rewarded with Bennett reading quotes about failure in an encouraging-yet-condescending manner. There is a reason the game straight up tells you not to play if you've had a bad day.
Because of these things, it would be easy to pass over it. Yet I believe this game is worth playing, because it contains quite an interesting design philosophy. It isn't even hidden, it's very on-the-nose and narrated by Foddy himself but if often overlooked, either by players never reaching that far or as a result of frustrstion. I will cover a few pertinent points. Please bear in mind that this won't be a 'review' as such, but rather a short essay on the design and philosophy of the game.

Failure and difficulty in games
As Foddy explains, Getting Over It is a homage to the 2002 B-game Sexy Hiking by Jazzuo, which follows a near-identical premise where players must climb a 'mountain' with a mouse-controlled hammer. B-games, as Foddy explains, are 'rough assemblages of found objects', typically made for the love of it rather than a polished end product, often to the detriment of usability or aesthetics. Sexy Hiking is much harder and bare-bones than this game, although the core design is identical - the awkward obstacles, terrible controls, constant risk of failure and the pure frustration as a result of such failure. This style of design seems harsh, but Foddy justifies it:

"...There’s a sense of truth in that lack of compromise. Most obstacles in videogames are fake - you can be completely confident in your ability to get through them, once you have the correct method or the correct equipment, or just by spending enough time. In that sense, every pixellated obstacle in Sexy Hiking is real. The obstacles in Sexy Hiking are unyielding, and that makes the game uniquely frustrating. But I’m not sure Jazzuo intended to make a frustrating game - the frustration is just essential to the act of climbing and it’s authentic to the process of building a game about climbing."

Although Foddy is commenting on Sexy Hiking, the same design philosophy is at the core Getting Over It. In a way, it is comparable to Dark Souls in terms of difficulty and losing progress. Both games are good examples of designed difficulty, where difficulty is the core concept and focus of a game rather than a simple scaling difficulty. Unlike 'fake' or artificial difficulty, progress is more reliant on the player's own skill. For example, in Dark Souls the player could have the best equipment in the game and still die to a low-ranking enemy due to greed or a mistimed parry. In both games, watching a tutorial or walkthrough rarely gets players anywhere - the game relies solely on mechanical skill. The only way to beat it is to, well, get over it.
Another facet of this design is the lack of a save system. This reinforces the sense of failure, as it prevents players from save-scumming their way up the mountain and forces them to persevere through every mistake. This then leads to the second point - losing progress shouldn't be taken to indicate failure, but rather a learning opportunity. Through failure, the player will discover what surfaces can and can't be used to climb, as well as how to surpass certain obstacles.

Often, a key distinction between artificial and designed difficulty is fairness. How to balance fairness and difficulty is often highly subjective. I would argue that this game is fair - fair in the sense that there is little unpredictability and there is a clear progression in skill. The controls, although fickle, can be mastered. The hammer will always swing where you make it swing and act with the force you apply to it, whether you intended it or not. The game doesn't have a tutorial or explanation on how to play, but slowly builds up the difficulty by introducing ever-more complex obstacles.

An important point is that even though the nature of the design is fair-but-difficult, it naturally elicits frustration. The biggest part of playing the game is to overcome and work through the frustration. Ultimately, becoming frustrated with the game won't change anything.
I also think that, because of the steep learning curve and frustration involved, the game is a good test of the player's character and patience. Do you get angry and blame the game to no avail? Do you accept defeat and uninstall? Or perhaps, through setbacks and failure, you keep climbing until you reach the summit.

Conclusion
Getting Over It is a difficult and frustrating game that is well worth trying out, even just for the experience. It has an interesting design style and is very appealing for anyone who likes difficult-by-design games. And turn Tracking Tuning on, you will thank me later.
View all 2 comments
Badge Collector 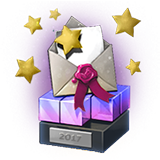 87
Badges Earned
30
Game Cards
From the time I was hacked:
Your account will get banned at 02 February 2020 (11:59:00) GMT
You will not be able to play on public servers in Counter-Strike: Global Offensive and you will not be able to trade any in-game items after 26 July 2021 (11:59:00) GMT. They will be trade banned forever.If you want save your items, send it to another account.
Achievement Showcase

u n i v e r s e Jun 4 @ 8:39am
Sup man, my friend recommended me to invite you to our team. We have flexible schedule and good salaries. So if you want to try - you're welcome :) Add my main to discuss all of this → https://steamcommunity.com/id/dungeon_mr

burst angel May 30 @ 6:58am
Hi, our team went to the finals of a decent tournament, but our player will not be able to take part in this match, we urgently need a stand-in who can replace him.
If we win this tournament, you will receive about $600~
Add my main account, if you're ready to compete https://steamcommunity.com/id/Loakus
< >