Director of Acquisitions
967 XP
Why do you hang out with me? Cauuuuuuuuuuuuse I'm awesome.
View more info
Currently Offline
Badges  59 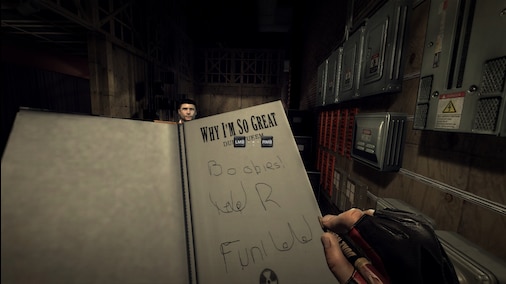 Words to live by.

Saints Row IV
53 Hours played
So, this game really is as awesome as it looks. In the same way that SR2 jumped in craziness to SR3, it's just as crazy a jump to SR4.....except this is waaaaaay more fun. Driving in this game becomes the least interesting way to travel around the world when compared to super sprinting and leaping over buildings, weapons get even crazier courtesy of things like the black hole gun, dubstep gun, and the 'Murica Weapon.

When you have the excuse of a simulation for everything, you can get away with a lot of hilarious things. You end up in a 1940s styled world a couple of times, you fight a gigantic soda can mascot, and even end up playing a 2D styled beat 'em up at one point in time. Honestly, I haven't had this much fun in a video game in a very long time, and this is easily GOTY for 2013 barring something even more fantastic coming along, which I doubt highly.

But stop reading this! Go buy it now!
Leave a comment
Achievement Showcase

3.4 hrs on record
last played on Jul 12
Hexcells Plus
Achievement Progress   4 of 6

Plinko Jul 14, 2012 @ 10:15pm
I know it's not your normal thing, but I really think you should consider buying some games during the Summer Sale.