This user has also played as:
Shivendu Mishra 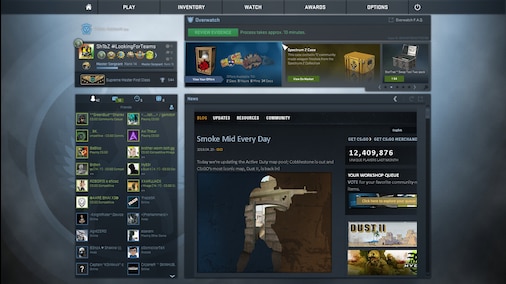 Road's about to come to an end, last milestone left...

...When a boy of 3 came across his dad trying to teach him basics of operating a computer system. Probably not the best thing to start with , or guess he didn't realize what was coming his way , he thought starting with Video Games . Least to make the learning fun perhaps

But things didn't pan out the "right way" and I got hooked onto the fascinating world that was in front of me and that's where my journey began with the game , quite unheard , a demo version of "Beetle Crazy Cup" . There were bunch of other 80s / 90s game as well , bundled along and collectively called , what used to be quite common back in the day "Shareware Discs" .

I recall games like Bio Menace , Dave , Contra , Mario , POP 1987 , Wolfenstein-3D , Pac-man, Glimpses of Half-Life (I'll explain it later) etc. having fond memories with them , with not so computer enthusiast mom trying to put in some commands in the command prompt of DOS to run these titles. Yes mates ! DOS in 2003 when the world was moving on with windows XP and 95 , 98 were still okay-ish and a common sight across limited number of PCs across the Indian households and other places. And it continued on and off up until 2007 for some strange reasons - ' probably economical ' , because I was a constant menace , deleting computer drivers etc. and apparently the root cause for hampering the computer for 'playing games excessively' XD - the one thing that still bothers and boggles me when I sit down to retrospect occasionally that why did they think so !???

Also coming to the finances , Parents toiled hard to make the family of three's ends meet during initial days . So a PC with bare minimum ram , A pentium - II processor and 80 gigs of hard drive storage was obvious and quite fitting. And possibly here's why the actual on/off switching to DOS and XP was evident . During this time there were also subtle changes and explorations going on ...

We moved to different place near to our former stay in Delhi in 2004 , what is now the 'housing factory of Delhi - the NCR' XD ,due to my schooling and Dad's office. Things moved on and one day I came across a neighbor on the lower floor of a two-storey rented house . I was again mesmerized by the games that he was playing - " Monster truck Madness , Motorcross Madness and couple of other games " . What struck my attention was a 'shooting game' - as back in the day I used to yell about it , whenever I got a chance to respond to which game I want to play on any visit to a place which had a computer. This was around 2005 .

Things moved on I was still having curiosity and urge to play that 'shooting game' grew. Now probably at that time in 2005 I was told about it , the name and all , but it just got off my head. And then came the year of 2008 or 2010 when the memories of '05 were cherished and I got to know or recalled about the lovely (lacking words for it <3) game of 'Counter-Strike

' . This instance happened when we visited the former land lords ( more like "relatives" as the bonding was immense ) in Delhi and I got to hang out with my best buddy back then , the land lord's son who was actually way to elder than me. So the sheer and obvious bonding reason were 'Video Games' . Things moved on , and oh btw , I also came across games like Midtown Madness , Motorcross Madness , Quake II , Project IGI , Halo : CE (<3) , NFS : Undercover , Hot-Pursuit , Pro-street , Spider-man : Friend or foe , Gta Series ( Vice-city specially , which I actually cried about to run on my PC/netbook (2008-09) up until 2011 ) etc. which only were a sight on the covers of cheap pirated discs. Yes none of them ran except Spider-man , Midtown and Motorcross Madness and bunch of those previously mentioned old titles like Wolf-3D . I did get a PS2 on my birthday in 2009 , a 9'yo kid got fascinated by the gift of a 'supposedly close relative' , which for certain reasons my parents didn't approve of , because of some family tiff. I also did get a title, "the only title" for it 'Chicken little : Ace in Action' after much convincing and pestering my Dad. Later on I also got WWE : Raw Vs Smackdown 2011 , the last in the series to come on PS2. I remember turning my PS2 on for days cause I wasn't able to get my hands on a memory card !

In 2011 , I was super excited as the old computer was finally getting upgraded. But something was peculiar which didn't seem up until 2 more years to come ; the build was actually inappropriate and it seemed like a scam sort of... . Nevertheless , things moved on ahead and during this time 2010-2012 , few games like GTA:SA , NFS : MW , Condition-Zero , CS 1.6 , Desert Storm etc. were my get go favorites. Through this phase I was also curious to know about steam. I always used to wonder what t'was all about... sounding like a noob but there wasn't actually any exposure or that much of an awareness about gaming let alone e-sports in my vicinity. But I remember the chill non-steam CS 1.6 Lans we used to have in local cyber cafe's where it used to be like 12 y/o's screaming and yelling and the cafe guy trying to shush us up all the time XD .

Dad bought a laptop with Radeon graphics , it was cheap end one but ran most of the titles smoothly. I remember ordering and thereby purchasing my first ever genuine copy of a PC game , that I got in a physical disc format (man I just simply love having physical copies , the extra content that you get <3 , plus the box itself seems like an adding piece to an actual collection) . GTA:IV it was . And perhaps now I know why the ratings on games are actually a big deal

! Cause when I recall what a jerk I was back in the day ; not like something dastardly I used to do but in a nuanced way , (most of us are but its okay , it's a part of growing up :) ) , I do feel the ratings need to be adhered to :P

or at least there needs be that much maturity or open discussion so that we can take these games the way they are meant to be , not like something over hyped up or something that becomes a subject of secluded talks that we used to have with our friends.

Things went on and I was having my time with GTA : IV and a bunch of other games. Then came the year of 2013 , the time when I finally got on to steam ; explored a lot about it and tried my hands on the ever infamous Team Fortress 2 . I was always keen to know more about Half:Life , had heard a lot about it and the buzz surrounding it made me become a part of it's fandom. And then obviously I came across a shiny new 'Orange Box' being retailed in one of nearby stores for which I really whined about to my mom to get me one. Eventually I didn't get it from the retail store but got it ordered online and it felt like I'm on top of the world XD ! But the problem was , not that things were data

4.9 hrs on record
last played on May 31
Road Redemption

Beydar Jun 30 @ 4:49pm
Hеy mate, I have playеd CS against you rеcеntly and I'd like to invitе you in our tеam. We are willing to pay you weekly in case you compete in tourneys with us.
If you are interested - Hеrе's my main account, add mе plеasе https://steamcommunity.com/id/burner_founder