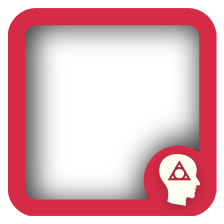 Not Recommended
0.0 hrs last two weeks / 1.7 hrs on record (1.4 hrs at review time)
I've got a great idea. Let's run around in a house rendered in the cheapest CAD program we can find, clicking on silhouette letters in between poorly-executed jumpscares. Who's with me?

Even if you aren't, the developers of The Emptiness are, and they even pose it as some kind of insightful rumination on depression. Seriously, the game opens with a warning about disturbing content in a delightfully Hot Topic font, and then launches into a diatribe about the nature of depression. The Poser-modeled house in which you find your sad-brained self is a sort of purgatory, as the FMV demon and angel explain. I want to pay these two special recognition, because they look like family members of the dev team, and I swear to God the devil is wearing a brown Snuggie.

You navigate the static rooms by clicking on the arrows linking your views, which allow for multiple vantages on the same scene. This is in no way a good thing, because your goal for most of the game is to click on hidden letters in the scenery that are only visible from a single point. So, if there's a Q blending into the wallpaper, you might only be able to click on it from the middle of the room, and not from the doorway that has almost the same field of view. These letters form "spells" that undo the seals on the doors around the house, granting you access to such key locations as the bathroom. The scenes actually get less detailed as you progress, with fewer points to examine and forcing more backtracking.

Aside from some absolutely banal minigames in between seals, I've just described the extent of the gameplay. Once or twice per spell you may find an item you have to use to get a letter, but more natural puzzles like that are extremely rare. What breaks up the monotony between clicks are the bargain-basement jumpscares sprinkled all over. Be ready for hands popping out of paintings, screaming faces on TV, bleeding walls, and more programmer kin making faces and lunging at you. My favorite is the portly, balding fellow in the black sweatsuit who explodes out of the kitchen wall Kool-Aid Man-style if you click on a Post-It with a rune on it.

The Emptiness is ugly, obtuse, and boring. If you make a living screaming at bad horror games on YouTube it might give you something to work with, but as far as enjoyment goes, it's running on empty.
Do you recommend this game? Yes No
Cancel Save Changes
Was this review helpful? Yes No Funny