This user has also played as:
Myles Casey .The Last People On Earth.
15 Members

This is Irish Gaming Community.
78 Members 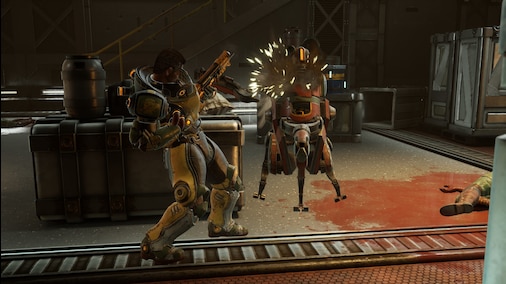 DEATH STRANDING
104 Hours played
This is the final frontier. Un-bridled, full-on Kojima. Free from the shackles Konami had bound him with, Punished-Kojima and his new game studio storm onto the world stage with, arguably the best walking-simulator ever conceived.

The following review will explain the game's setting and world a small amount, without delving into story spoiler, but if you want to go in blind, I suggest you stop reading now.

Set in United States, Sam Porter Bridges, along with his good friends Deadman & Die-Hardman (Yes... I know...) make their way across the country, uniting the cities of America into the new-world-country of The United Cities of America. While Deadman & Die-Hardman travel via hologram, Sam (and you, the player) must walk.
Most of the gameplay in Death Stranding, is you guessed it, walking. You'll walk from city to city and back again, then to another, then another, then go back to the first one, then back to another, and so on, all the while delivering packages. By delivering to cities 'off-the-grid' and in far-off places, you gradually encourage them to join the UCA (United Cities of America), which uses an advanced tele-communications network known as the 'Chiral Network' (Think of it as a kind of Super-Internet), which serendipitously sprung up around the beginning of the ongoing apocalypse. The mysterious and un-explicable ongoing apocalypse has, sort of, merged the afterlife with the real world, lost souls, known at BTs spring up randomly (and not so randomly) around the game-world, to hunt you when you enter their areas. They always appear in areas of heavy rainfall, or 'timefall', so called because if it touches you, you begin to age pre-maturely, and rapidly (Your cargo, as well -_- ).

As detailed as that description was, it's only the backdrop for the actual story, which involves terrorists, babies, flashbacks, ghosts, top-secret projects and other Kojima-esque madness.

The views in the game, as you can see from the screenshots are gorgeous, at almost any point, you can turn around and see some beautifully hand-crafted scenery, to snap some screenshots.

The 'Passive-Mulitplayer' is genuinely fun to engage with, making Death Stranding one of the only single-player games that benefits from having an 'always-online' component. Other players can build structures in their game-worlds which can permeate yours, helping you immensely. Ladders and climbing-ropes appear at difficult climbing points to help you, making your journeys much easier. Players, constantly trekking one way can start to form paths, just-like in real-life, grass wears away and rocks slowly disappear, as a perfectly-trodden path appears in your game-world. Structures, such as bridges, zip-lines and timefall-shelters can appear and you begin to create your own as well, not with the intention of using them yourself, necessarily, but with the knowledge that you'll help some other players in the near-future. You'll begin to bring ladders/climbing ropes with you, knowing that after you make a perilous journey up the side of a cliff, you can use them so that another player doesn't have to.

It's a truly fascinating gameplay mechanic and players' structures don't appear so often as to make you feel pampered to, but just enough to feel as though there are others traversing the world.

Hopefully this review helped inform your purchasing decision, thanks for reading!

Another 'Shift-Tab Because You're Bored Guide'
By Jackets

Another 'Another 'Shift-Tab Because You're Bored Guide''
By Jackets

charlixcx Mar 5 @ 1:37pm
bought me a game that i literally can't play in case my parents walk in