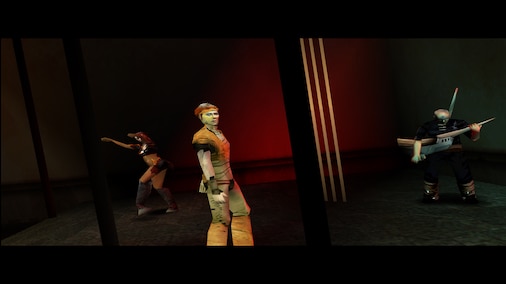 Awesome moment from the greatest unplayable game of all time.

STASIS
16.3 Hours played
The best thing I can say about Stasis is that is reminded me of Sanitarium from about 1999. I mean that as high praise. Overall, I think the game is very much worth playing for adventure fans, in spite of some flaws. It was simply so much better in some ways than it had to be, that it made up for the little annoyances.

For example, the animations and videos were very well done, giving the game a top-tier feel in spite of the somewhat dated appearance of the isometric locations. The atmosphere was creepy and suspenseful enough to make up for the somewhat overdone derelict ship horror sci-fi premise. I generally don't love it when games tell you the story almost entirely by journal entries that you find lying around, but in this case, they are so well written with so few typos or grammatical errors that I actually found them a pleasure to read. They tell a story of developing interpersonal drama between the crew members as things went to hell, but more importantly, they are critical to understanding what is going on, so it's good that they are so readable. Those logs aren't voiced, but there are characters talking to you over transmissions who are fully voiced, and that's done fairly well. I found the atmospheric ambient noises, music, and background transmissions to be much more effective than the voice acting, though.

One unique feature of the game is both entertaining and tiresome depending on the moment, and that is the way that you will repeatedly die, get an achievement for dying, and then find the scene restarting for you. The achievements reveal over a dozen ways to die or kill yourself, and I wandered into almost half of them without trying to earn them. Some of them start you right back in the middle of a scripted sequence without the inventory items you grabbed before dying, so that is annoying, especially considering that those fatalities tend to jump out at you. You'll know to avoid them next time if you can figure out how, but often you won't realize there's a threat until it gets you. I don't plan to go back and find the rest, so if you like to 100% a game, you might hate that feature.

Other annoyances include some glitchy behavior in the movement and the inventory. Often you will click an item to see if you can interact with it, and your character will walk the opposite direction. The lines used to tell you that the item you're trying won't work are generally awful, don't fit any context, and take so long that you are already clicking somewhere else, getting no response, while the voiced "no" line is still playing. I think they were meant to be clever, like "I could try to make it fit, but it may break," but try hearing that out of context about a hundred times and it's not clever anymore. Also, occasionally I would open my inventory and there would be nothing there until I closed it and tried again. The good news is that nothing was game-breaking.

Another strength that goes a little too far is the totally disgusting ship and the research you find going on there, which is cool and engaging except the rather ridiculous amount of blood streaking everything to make the point. This goes with the plot approach of everybody-is-miserable-and-all-story-events-suck that turns me off to TV dramas, but it works okay in this game. And as much as I liked the art in general, the isometric view does leave a lot of the screen edges blank most of the time, and the sense of depth is hit and miss, so sometimes it's hard to tell what you're looking at in the very dark scenes of typical spaceship walls, tubular hallways, and computer terminals everywhere. At least the hot-spots often twinkle, with the excuse that computer displays would catch your eye in the dark.

I say all that to see if you are still interested. If so, then you must be used to adventure game structure and logic, in which case very little of it will bother you and most people attracted to the concept will find it well worth playing. I am biased to tolerate all of that stuff if the atmosphere, story, and overall environmental puzzle design are good, and they are. So if that's still how you approach point-and-click adventures, play it for sure. For all the misery, filth, and dark backgrounds, you will find instances of fear, beauty, and satisfying moments of accomplishment.
Leave a comment
Favorite Group JetFred Sep 26, 2014 @ 2:01pm
I have 827 games in hard copy. Many of those are now also in my Steam collection. There seems to be no reason to add any more except Blizzard titles.

If you hadn't taught me to love Half-Life when I was a little kid, I wouldn't be on Steam today.