I started playing computer games when my parents bought our first computer in 1989. Shortly thereafter, I learned to build and modify my own custom computers and enjoyed playing games such as Scorched Earth, Secret Agent, Wolfenstein 3D, and Doom.

During my college years between 2000 - 2004, I was introduced to Team Fortress Classic on my dorm floor at Iowa State University, and we started our own "floor team" in STA, OGL, and other competitive leagues. After winning a few high level league championships with -L2D-, and being involved with the Twisted Network (tN) Community, I moved on to Team Fortress 2 with my best friend Fierce in 2007.

Since then, I've played competitively between 2008-2012 at many levels ranging from UGC Platinum to ESEA and CEVO Invite and have played at the highest levels in other former leagues such as OGL, STA, and TWL in TF2 with {dw!d}, [m7k], tN, and <3.

Retired from competitive gameplay years ago because I have more important ♥♥♥♥ to do.

Tagg remembering we used to play UGC Platinum, CEVO, and TWL Invite together

BEWARE IMPERSONATORS. My Level 69 Steam Account and my Steam Account dating back to 2004 will guarantee that I am who I am. If someone adds you and their profile says anything else, then it's not me.

I no longer trade items of value and the items I currently have will stay in my backpack forever. Don't bother to add me to trade, your request will be ignored.

I am no longer involved in cash trading as I've sold all my items of value I don't wish to keep. 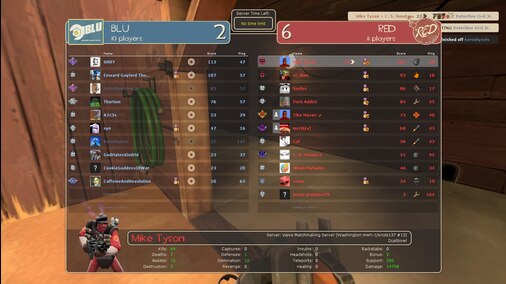 Dominating the entire team. Too easy.

1.1 hrs on record
last played on Jul 29
Golf With Your Friends
Achievement Progress   7 of 67