This user has also played as:
Attila Please leave a message in the comments section before sending me a friend request. No private profiles, unless we know each other.

If you need a playing partner (in a game we both own obviously and you are on my friend list), hit me up.

If I don't reply immediately it's not because I'm impolite or antisocial, it's probably because I'm busy or away (which can happen even when I appear to be ingame sometimes). I always reply to messages.

I like to browse through other people's screenshots, because it's fun... so beware! :)
Favorite Game

Alien: Isolation
141 Hours played
Alien: Isolation is not only the best Alien game I've ever played, but also one of the most terrifying games. Consequently, if you can't handle (almost) constant terror, then this game - no matter how good - is not for you. By terror, I don't mean jumpscares and scary moments, but true dread, known from the original Alien (1979) movie.

There were quite a few Alien (+Aliens vs. Predator) games before, and with the one exception of Aliens vs. Predator 2 from 2001 (sadly, the only one not available on Steam) they aren't very well made. This one steps a bit away from the action genre and focuses more on horror and therefore stealth. Now it isn't one of those crazy FPS stealth games, where we are equipped with an infra-red camera instead of a(n even makeshift) weapon. No, we have access to many interesting weapons and gadgets here. On the other hand these will only help us to escape from the practically invulnerable main enemy of the game: the Alien. The xenomorph is not the only thing we have to be aware of however: some humans and androids will also be trying to kill us. Thus the game wonderfully creates the 'every breath could be your last' concept and never allows us to let our guard down.

We play as none other than Amanda Ripley, the mentioned, but never before seen daughter of Ellen Ripley, the protagonist of the Alien series, set 15 years after the well known events of what happened on the Nostromo. As a matter of fact Amanda seeks the flight recorder of the freighter, recently discovered by a salvage ship, the Anesidora, in order to learn more about what happened to her mother. This involves a trip to Sevastopol, a remote and soon-to-be salvaged space station owned by the notorious Weyland-Yutani Corporation, where the spacecraft is stationed. Soon, all hell breaks loose, when it turns out that one of the passengers of the Anesidora was impregnated by a xenomorph, and an alien is now roaming free on the space station.

The game shines from the point we first encounter the alien in a less than preferable proximity. From that moment the game is unforgiving, because we can run away from androids and sneak behind humans, but the alien is too fast to be avoided by doing either of those. We have to carefully plan where and how we go, hiding under beds, behind desks, in lockers. Be prepared to die a lot, especially on one of the earlier levels (Mission 5: The Quarantine) where the alien literally hunts us, without distractions and in pretty open areas. When the alien pops out of a ventilation duct right in front of us and there's nowhere to run, we can only hope it will turn away to another direction. This is unarguably the most difficult level of the game (besides the last one), so don't let it put you off.

Aside the many craftable items (noisemaker, molotov cocktail, smoke bomb) we can rewire system consoles to release dusty air (watch out, it's only temporal) at certain locations, decreasing visual range (for both us and our enemies) and can also turn on remote speakers to distract opponents. Unfortunately these system consoles are not as commonly used as they should have been, so it feels like a missed opportunity mostly.
The motion tracker works better than in the movie, because it only detects living things, not anything that moves (like falling objects for example). It greatly helps us avoiding enemies, but its beeping can also give our position away. Also the blurring of the background is a very cool effect when focusing on it.

Levels are fun, most of the time we have a clear goal, and will actually know why we are going to a specific location. Often we'll go to locations we know we shouldn't, but since there's a generator there that needs to be restarted, there's no other choice. These are also great moments, reminiscent of the Alien movies' memorable scenes. Talking about memorable scenes we also get to rediscover LV-426 through the narration of a member of the salvage team.

Backtracking is not an annoyance, because most of the time we'll go back to previous locations to get into areas that were inaccessible before, using our upgraded tools (the access tuner and the gas torch). In order to find all the Nostromo logs (isn't necessary, purely opional) we'll have to get back to places we wouldn't go otherwise.

The art design, the retro-futuristic style in which the environments are created is jaw-dropping. Some corridors, interiors look like they have been taken straight out of the movie. We really feel ourselves in the Alien universe immediately immersed. Other elements of the graphics are impressive looking as well and some effects (like the flames or the sparks of electronic bursts) are amongst the best I've ever seen. Small weak point is that the game uses a weird anti-aliasing method and the edges look a bit jagged even on high settings. Also at this level of detail one could expect the game showing reflections of ourselves, which for some strange reason is not the case. Another strange thing is the occasional stuttering during game engine cutscenes, which are only mildly annoying in contrast of the game's otherwise perfectly optimized and fluid movement.

The audio is also outstanding: the heavy footsteps of the alien, the androids warnings, the voice of our heroine (even though a bit overplayed sometimes) and of the actors of the original movie, the muffled noises of gunfire in one of the adjacents rooms (and the following screams). You really want a 5.1 system for this game, not only because it's great, but also useful and helps avoiding the alien.
The music is fantastic, taken from the original movie, but at some action sequences (when the 'action score' kicks in) it's way to loud, and while it successfully increases tension, it does make the game harder by suppressing the sounds of the alien or other hazards.

On the theoretical side, if you are an avid Alien fan, you have to overcome some flaws: according to alien lore, aliens use pheromones to detect their prey. So if we were hiding under a table, it would still catch us, etc. The other thing is that the revolvers in the game use .357 bullets and considering their power, those would seriously hurt the alien as well.
Still these problems are only theoretical and of course it would be impossible to play the game through with a hypervigilant alien and it would also be gamebreaking to kill the alien on the earlier levels with a magnum and just explore throughout the rest of the game.

Alien Isolation is a great game in every aspect and survival horror has never been this enjoyable and thrilling. There's not a dull moment, even when the alien is not in sight, the androids, the other survivors fill the game with excitement and it's rich in story and turning points. The alien is highly unpredictable, it wanders around without patterns and occasionally it will look inside lockers and airducts for us. The moments it catches us (and sometimes it will :)) is also amazing and it's worth watching the animations just to see how many ways it can kill us.
Even though there are several minor glitches (next to the already mentioned ones, sometimes the screen slightly shakes throughout the whole section of a level, as an aftereffect of a previous, intense scene and using the flamethrower while crouching won't scare the alien off) none of them are game-breaking or frustrating and the game's elements are so great and everything works so well, that I managed to overlook them almost completely. You should do so as well and if you like the Alien universe (or just sci-fi) and aren't faint of heart you are going to love this game as much as I did.

PROS
+ superb art design and audio, recapturing the Alien atmosphere
+ we get to play as Ellen Ripley's daughter
+ simple but compelling storyline
+ memorable locations
+ great implementation of the alien 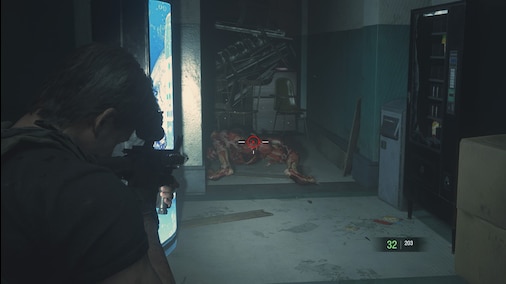 Always going for the vital organs.