This user has also played as:
Wuffington Redice "Sometimes the best way to Solve your problems... ...is to help someone else" [feen.us]

Number of Game gifts on steam given: 87 (not counting Soundtracks/DLCs)
Number of Humble Bundles Given: 20

4,862
Achievements
34
Perfect Games
44%
Avg. Game Completion Rate
Hello! And Welcome!
Hello! And Welcome to my profile!
Comment Why You're Adding Me!! Not Leaving a Comment Will Result in you being ignored!
Want to trade for something i have? check backpack.tf (or whatever trading place i have listings) and check if said item is listed.
If not on the listings, ITS NOT FOR SALE, End of story.

I'm Wuff Mc Donks, But Commonly just known as 'Wuff', i have been known by several other names before, so there's a small chance you might've met me under another name (Probably Either 'Redicewind' or 'Medi Knight'), I Commonly play the likes of TF2, typically play as any class, Main being Demoman, I also have a Discord server, its basically for emotes and just general chatting, You Can Join Here! [discord.gg]

Trying to become a better sniper, sorry if i dragged your team down!

Don't Come to me looking for Free items Just Because i'm on TF2R, Scrap.tf or r/RAoTF2, Yes, i do raffles/giveaways, but i'm not a charity shop, I will Block you if you come adding me looking for free items!

I may look dumb, but i'm not dumb enough to fall for your phishing crap, but if for whatever reason i do add you, I plan on attempting to waste as much of your time as possible.

Speaking of adding people, COMMENT WHY YOU'RE ADDING ME! - Unless i know you (i.e friend from discord, twitch, etc.) Also:
I'll not Accept your friend request if you're one of the following:
Any number of VAC bans on your account - i will just straight up Block your account.
Private Profile - Note i'll accept private profiles IF i know you and have talked to you, i.e. Communities/discord.
If you've caused trouble/been an ass/jerk/etc. to me or any close friends. - Simply enough.
Are a cheater. - Really, If you're that bad at the game that you need to use cheats or some bot to play for you, why even bother joining the game?

Note: Just 'Cause i have a furry avatar, Doesn't mean i'm gonna accept/like you cause you're also a furry, I don't do Sexual RP, I don't use shit with furry Websites or even go to any fur-cons! and tbh, alot of other furries i've met have been terrible/disguisting/they're what people see which ruins the fandom for others.

For Whatever reason, Steam doesn't pop every notifications, such as trade offers and friend requests, i may also just be busy playing the game/being too focused or just even being AFK, So Sorry if i don't Respond instantly to these!

Note: I am Willing to help friends With achievements if i own the game(s) required! Don't be Afraid to ping me. :)

TF2 item Wishlist!
List will be updated every now and then, if you wanna drop something by (for whatever reason), trade link is up in the main profile box... Also Serves as a Reminder to myself.

The Board of Random Quotes!!
'always smile; it'll either make them happy, or piss them off. either way, you win'

Dr. Grijpgraag: might as well just get back to slapping the shit out of you with an umbrella

Skyrazar: You're like a PB&J Sandwich without the PB or Sandwich.

Echaen - Today at 7:22 PM
Who're you supposed to be anyway, the 9th (and shittest) Musketeer?
Kappa

Skeppet99 (swe) ツ : you scarf piss of shit of me i throw my mouse away

uraniumguyss : why'd you make me a plant wuff

Comrade Firedash : You're the human equivalent of a participation award.

デブ : would it be a boneless pizza or a pizzaless bone?

Ender : double donk me one more time and I will personally donk your pay check
Artwork Showcase 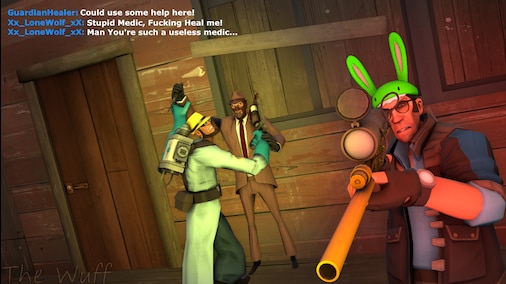 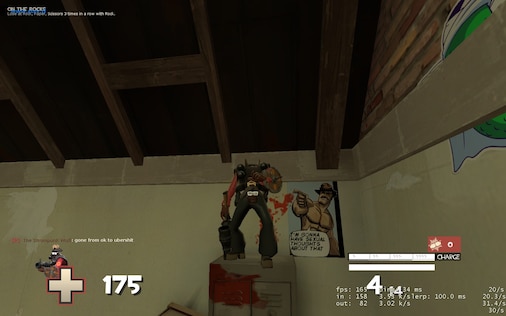 Just drop a Trade offer! (its up at the top of my profile!)
Badge Collector

Cometh Knight Wuff! Tis the time to drink 'n explode those bastards together!