This user has also played as:
CWW CWW is a co-op based clan that uses Arma 3.

CWW is first and foremost a co-op based clan seated in the Armaverse. ( mainly Arma 3 as this is the latest and best release. )

We are a laid-back easy going group of long time Arma players whos main goal is to play any assortment of missions that either
members of CWW have made themselves or missions we enjoy from the steam workshop and/or armaholic.com . Our time tables are pretty
much all inclusive as our member base is international but our aim is to have official game nights on fridays. For brand new
Arma players we have ..... as training days where Drymouth and any other experienced member willing to attend as a coach will
teach new comers the lay of the land and how to utilize the entirity of controls available to players in-game. Missions, while
often too long to complete during one single session, will be split into stages for convenience. We also host a range of shorter
missions that last anywhere from 15 to 20 minutes and often use these as preliminaries to larger operations, some with and some
without respawn enabled depending on how far the mission is in its developement. There are literally thousands of different
scenarios to choose from.

You as a member will receive points throughout your time spent on our servers which in turn is used to calculate your rank. Your
rank is indicative of your experience as an Arma player over all and will be shown on your character's insignia in-game. CWW
focuses on teamplay aswell as sessions where we just sandbox different maps and test mods for fun. When you sign up for CWW
ask about Armaholic and the steam workshop and someone will take you through the basics of setting up mods if need be. Fridays
will be exempt from this considering the itensity of planning and team effort it will take to make the session as enjoyable
and realistic as possible. This entails that you as a memeber of a squad can listen to orders and accept the more stringent
style of play we utilize during friday ops.

CoopWorldWide has been running for 17 years since the release of 2001's Operation Flashpoint and we accept members that fit
our criteria for recruitment ( ie. age and ping ).

The idea behind the ranking system goes as far back as 1994's Cannon Fodder ( a game by Sensible Team ), where your recruits
would advance in rank on the premise of missions completed. This ranking method has been adopted for CWW and encourages members
to work together.

I ( Ravenbb ) used to be in the now disbanded Black Eagles of Scandinavia, a clan who's focal point was a sim called F22-ADF
run by "Daddy". When they disbanded 17 years ago I decided to create and manage CWW for Operation Flashpoint. OFP is the
parent game to everything Arma is today.

We still enjoy the same genre blending gameplay to this date. It can only get better, bigger and more advanced with time.
The possibilities aremore or less endless with our talented editors at work year round. So it is with some amount of pride
we call like minded PC gamers to arms to a community that has been evolving since 2001.

Welcome to the fray, welcome to CWW. 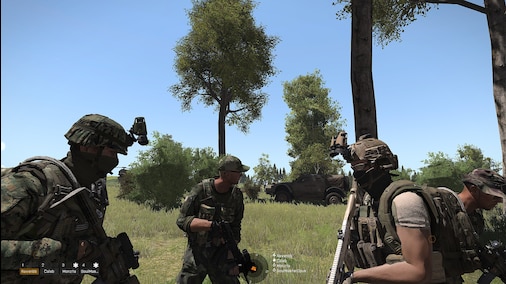