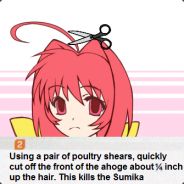 To The Stars
500 XP
What the ♥♥♥♥ did you just ♥♥♥♥♥♥♥ say about me, you little Kisama? I’ll have you know I graduated top of my class in the NSF, and I’ve been involved in numerous secret raids on Jinrai, and I have over 300 confirmed kills. I am trained in gorilla warfare and I’m the top sniper in the entire JSDF. You are nothing to me but just another target. I will wipe you the ♥♥♥♥ out with precision the likes of which has never been seen before on this Earth, mark my ♥♥♥♥♥♥♥ words. You think you can get away with saying that ♥♥♥♥ to me over the Internet? Think again, ♥♥♥♥♥♥. As we speak I am contacting my secret network of ghosts across Japan and your IP is being traced right now so you better prepare for the storm, maggot. The storm that wipes out the pathetic little thing you call your life. You’re ♥♥♥♥♥♥♥ dead, kid. I can be anywhere, anytime, and I can kill you in over seven hundred ways, and that’s just with my Knife. Not only am I extensively trained in detpack combat, but I have access to the entire arsenal of Group Six and I will use it to its full extent to wipe your miserable ass off the face of the continent, you little ♥♥♥♥. If only you could have known what unholy retribution your little “clever” comment was about to bring down upon you, maybe you would have held your ♥♥♥♥♥♥♥ tongue. But you couldn’t, you didn’t, and now you’re paying the price, you ♥♥♥♥♥♥♥ idiot. I will ♥♥♥♥ fury all over you and you will drown in it. You’re ♥♥♥♥♥♥♥ dead, kiddo.

That's it. I'm sick of all this "Grenade_Projectile" ♥♥♥♥♥♥♥♥ that's going on in Neotokyo right now. Grenades deserve much better than that. Much, much better than that.
I should know what I'm talking about. I myself commissioned a genuine Fragmentation Grenade in Japan for 2,400,000 Yen (that's about $20,000) and have been practicing with it for almost 2 years now. I can even explode slabs of solid steel with my Grenade.
Japanese smiths spend years working on a single Grenade and fold it up to a million times to produce the finest explosives known to mankind.
Grenades are thrice as powerful as European bombs and thrice as hard for that matter too. Anything a JDAM can explode through, a Grenade can explode through better. I'm pretty sure a Grenade could easily explode an American Imperial Marine wearing full powered armor with a simple vertical toss.
Ever wonder why the American empire never bothered conquering Japan? That's right, they were too scared to fight the disciplined JSDF and their Grenades of destruction. Even in the shadow war, Jinrai soldiers targeted the assaults with the Grenades first because their killing power was feared and respected.
So what am I saying? Grenades are simply the best bombs that the world has ever seen, and thus, require better stats in Neotokyo. Here is the stat block I propose for Grenades:

Now that seems a lot more representative of the exploding power of Grenades in real life, don't you think?