Stop invinting me to your uncool groups
23,706 Members

1,234
Items Owned
670
Trades Made
2,472
Market Transactions
Feel free to add me for whatever reason.
I will accept all friend requests unless you act rude, or I suspect foul play.
Screenshot Showcase 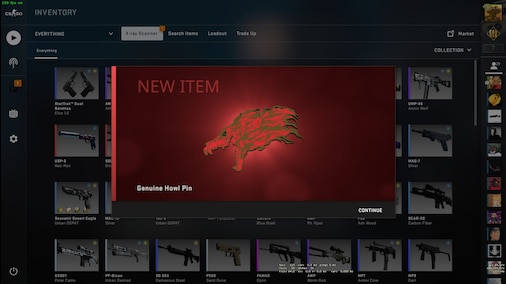 + 107
INFO
BEWARE OF IMPERSONATORS!
Look for the level 160 profile with a genuine howl pin. I take no responsibility for any hijacked accounts/lost items, and I can't do much to get them back either.

I am not the type of person to start a conversation. If you want to talk to me, you're most likely going to have to message me first.

Profile picture made by Dachi. https://steamcommunity.com/id/Dachios

I'm pretty open about information. If you have any questions about me, feel free to ask.
Favorite Game

Watch_Dogs 2
24 Hours played
I really enjoyed the first Watch Dogs game.
Nearly six years later, it still remains one of my favorite Steam games. So when Ubisoft announced a new Watch_Dogs game in my hometown of San Francisco, I knew I had to play it. Unfortunately, I didn’t have a PC capable of running the game at the time, so it just sat in my Steam library collecting dust for years. Fast forward to today, and I finally got around to beating it. Here are my main takeaways.

THE LOCATION
Watch_Dogs 2’s San Francisco is an accurate representation of what people imagine living in San Francisco would be like. This game's portrayal of San Francisco, however, is so inaccurate that it's downright insulting. Here’s a list of things that Watch_Dogs 2 got wrong.

It's too sunny. In reality, the entire city is covered in a depressing grey fog. I shouldn't be able to tell where the sun is, let alone see the golden gate bridge. It's also really cold. The last time I went outside with less than two layers was years ago.

It's too flat. San Francisco is covered in hills that make it very incredibly hard to go anywhere. It's should not be fun to drive around.

The streets are too clean. In real life, the streets of San Francisco look like a third world country. When I walk around as Marcus, I should have to fear my own safety, as I carefully dodge human ♥♥♥♥, used syringes, and broken glass. Speaking of broken glass...

Too many nice cars and not enough broken windows. It's nearly impossible to park a car, grab a coffee and not have your car broken into and looted within 5-10 minutes, depending on what neighborhood you parked in.

The public transportation works. The lack of bus schedule delays, unexpected maintenance stops, and overall lack of chaos really broke the immersion for me.

Not enough insane people. Throughout the whole game, I saw maybe 3 crazy people. This ratio should be more like 1 in 5.

Too many guns. Guns are nearly impossible to get in San Francisco. I had to pass a background check just to buy a pocket knife, yet it seems like every low-level goon has an assault rifle.

People run red lights. In real life, San Francisco has these ♥♥♥♥ing ♥♥♥♥♥♥♥t ♥♥♥♥ing ♥♥♥♥♥♥♥♥d mother♥♥♥♥ing red light cameras that record the license plate of any car that runs a red light and sends the driver a $500 fine. If Ubisoft implemented these ♥♥♥♥ing cameras, then maybe the stoplight hack would finally be somewhat useful.

Now with all of the shade I'm throwing at San Francisco Watch_Dogs 2, they did get a few things right. Here are some of my favorite features.

The NPCs are r etarded. Man, Ubisoft really hit the nail in the coffin with this one. Whenever the security guard takes cover behind a glass table or the police drive their car into the bay to catch my boat, I'm reminded of every time I've ever used public transportation, and I enter a whole new state of immersion.

Everything is expensive as hell. $65,500 for a plastic quadcopter with a camera sounds like a deal you could only get in San Francisco. $350 sounds like something people here would have to pay for an unremarkable hoodie. When I found out that my coffee was free, I had to double-check that Ubisoft didn't charge that 15 dollar Frappuccino out of my Steam wallet instead. I'm pretty sure that the free food and drinks thing is a bug, and it should be fixed ASAP. Other than that, the game’s economy is pretty accurate.

All jokes aside, this game captures the magic of San Francisco very well. Almost every landmark in the game exists in real life, and I was able to drive around the city without having to use the map. There were many times that I got out of my vehicle to marvel at the details I never thought they would include such as a back alleyway that I occasionally walk through, or a tennis court that I use sometimes with my friends. Although I’m still bitter that they didn’t include my home, I’m not really sure what I expected to be honest. The game’s portrayal of San Francisco is still quite impressive, and I could probably justify buying this game for just the map alone.

THE STORY
Watch_Dogs 2’s story is a lighthearted and cartoony take on a very serious issue as opposed to Watch_Dogs 1 which is a serious take on a by-the-numbers revenge story. While the premise of Watch_Dogs 2 is much more interesting than the first game, the game’s goofy atmosphere really takes away from the immersion and makes otherwise suspenseful moments fall flat. It’s a shame too, as the fight for internet privacy is a more prominent and serious issue than ever.

The same can be said for the characters as well. The characters are very well constructed and fleshed out, each having a distinct personality and design that make for memorable and entertaining dialogue. They aren’t bad characters, really, but the game’s light-hearted, silly atmosphere really makes the characters feel inauthentic or at least exaggerated. As a result, I only remember like two of their names. While the campaign wasn’t as heavy as the first game’s story was, it was still a good story nonetheless.

THE GAMEPLAY
The gameplay felts solid. My only real issues were the occasionally faulty controls, but it could just be me who sucks at the game. Most missions can be completed in one of two ways, loud or stealth. While it feels satisfying to complete a mission in stealth, going in guns blazing is just as fun, if not more fun. This is mostly a tribute to the game’s satisfying gunplay. The weapons feel powerful and natural to shoot, and aiming feels good even if the game is a console port. Technically, you can play the game nonlethally, but the first thing I did after I beat the tutorial was unbind the taser and buy a real gun because I’m not a little ♥♥♥♥♥. (Yeah, that’s right William. ♥♥♥♥ your pacifist bull.♥♥♥♥.) I’m sure that pacifism is just as fun, but I lack the remorse to let anyone in this city live.

While this game’s depiction of hacking is far from accurate, realistic hacking is incredibly boring and would make for horrible gameplay. The hacking in this game is simple and intuitive, and the line puzzle minigame while fairly easy, is still enjoyable. Unlike the first game where hacking takes more of a backseat to the open-world gameplay, Watch_Dogs 2’s hacking is featured much more prominently. Without spoiling anything, this sometimes plays to the game’s advantage, while other times it can be a nuisance when you just want to drive fast and pop heads. Driving in Watch_Dogs 2 feels a lot better than the first game. While I didn’t have any issues with the first game’s driving controls, I will admit that driving in this game feels a lot more natural.

Uhh, no. A general rule of thumb is to never pay full price for a triple-A title that’s more than a year old. However, this game is definitely worth picking up on sale. Any price under twenty bucks is 100 percent worth the price of admission. In summary, this game is a solid entry into the Watch_Dogs IP, and I can’t wait for the next game.
View all 3 comments
Achievement Showcase