This user has also played as:
Jonathan "Mizu" Kyle 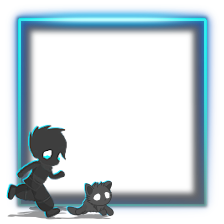 Years of Service
550 XP
Greetings there, Steam people or Youtube people! This is my primary Steam account on which I play a whole lot of variety of games or just hang around in to chat around the Internet. You can add me to play with me but do inform me who you are when I ask you or beforehand in the comments so I could take notice. 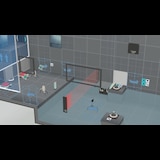 Difficult Coop Test Chamber 1
Starts you off slowly but eventually you'll get to the harder room. This chamber will test your coordination with your partner, your speed in keeping up with timed surfaces, as well as your ability to cooperate in getting to the hardest part of the level a

Devil May Cry 5
243 Hours played
Devil May Cry 5 is a stellar return to form and a true sequel to the founder of the Character action hack-n-slash genre!

From its story, to the gameplay, to the graphics, music, enemy variety, content overall - this game is oozing with passion from the developers and it shows around every corner. There isn't one mission where I couldn't just pause and open up the Photo mode to take a closer look around and make a few screenshots. This is all due to the excellent RE2 Remake engine which is superbly optimized, great-looking and, evidently, can create a spectacle to watch and play in the right hands!

The story revolves around the young Demon Hunter from the last game - Nero. He's been asked to help the Legendary Dante himself with his latest job to slay the Demon King before he resurrects completely and destroys the world. The client, a mysterious new character for the series, V, doesn't have much on who he is or how he knows of this, but over the course of the game the three playable protagonists form a bond that reinforces what's at the core of the series. I won't say more to avoid any spoilers but trust me when I say: This game is a joyride and filled with fan service for longtime fans and even new ones. If you haven't played any of the past games, there's a History of DMC to catch you up to speed on what you've missed, if you don't plan on playing them and it's good enough, but if you enjoy this game, might as well pick up the HD trilogy and DMC4 alongside it.

The gameplay is absolutely fantastic! As someone who spent several hours a day the weeks before this game released and close to 10 years of playing through DMC3 and 4 on a regular basis over time, this is how you refine perfection. DMC3 introduced the style system and weapon switching mid-combos. DMC4 let us change styles mid-combos, as well as expand the weapon slots to 3. DMC5 lets us do that, but also had a bigger arsenal of weapons, the brand new "Devil Breakers", which are varied in of themselves, as well as introducing a deeper and more challenging playstyle to learn in the form of V's pets, for those who needed even more. The enemy variety is also great! It's that old-school combination of good gameplay, level design and enemy placement that really gets your blood flowing and adrenaline rocking. And that's not doing it justice, as the kickass soundtrack, this time being dynamic and changing in rhythm, speed and volume the higher your combo meter goes, get you even more hyped to perform better and hear that oh-so-sweet "Smoking Sexy Style!" and be on your feet not to lose it anytime soon. Overall, as a longtime fan myself, I was able to start the game and feel right at home as Nero and Dante, while V took some getting used to, but I can see the complexity behind his moves and some better players have already showcased a lot more than what I believed he could do. But that's pretty much true for all DMC games and characters you play with, and this game is no exception.

Devil May Cry is not meant to be a game you play through once and put aside for a few weeks, months or more. It's meant to be replayed, experimented with, and mastered. I will state that the game is easier compared to DMC3 and only ever showed me the Retry screen once until I reached the Hard difficulty, and that's only because I'd grown accustomed to the difficulty by then, that the last boss was quite a surprise. Beating the game unlocks the next difficulty and there are 6 in total, though I'd advise any player, even newcomers, to start at Devil Hunter and ignore Human unless grinding achievements. After you beat the game once, you'll also unlock the infamous Bloody Palace that will sink in dozens of extra hours of your time for sure. A Challenge 'tower' mode where you have to beat 101 stages. This time, unlike in past games, you can pause and resume it another time, which is nice, considering how many times I've had to leave on my PS2 with 3 and PC with 4, but keep in mind that the progress is shared with the story. Meaning if you want to play a Mission, it'll wipe away your BP progress. Nevertheless, a good addition to have.

The game is full of content - enemy reports, concept art, music, costumes, DLC weapons are nice to have and worth it, nothing P2W here. There are some DLC which are standard for CAPCOM, such as the ability to purchase in-game currency with real money or Blue orbs that increase your life bar, but rest assured, there are 'farming' methods that don't take long to rack up orbs and if you were to do every secret mission and find every Blue orb fragment, you're sure to have maxed out your HP anyway. It's not restricted to the extra few you can buy off the store, don't worry. And besides, I had unlocked everything for Nero and Dante but the special taunts by the time I completed the game without 'farming' for orbs or replaying missions, with V almost completely maxed out as well. Do not be afraid of the term "Microtransactions" when you hear about them in this game. There isn't even an in-game store, only what you see on the Steam one.

On a side-note: The engine is extremely moddable and tweakable. While we still haven't had any new content other than BP since release, and the team behind the game is taking a break for a short time, modders have already made most of the changes that fans demanded (on PC at least) - Turbo mode, return of reversals, DMC4 Nero Costume/Arm reskin, other Spoiler-y reskins that you can see for yourselves, as well as many others if you are willing to look them up
(https://www.nexusmods.com/devilmaycry5 and https://www.tapatalk.com/groups/infernalworks/ are the best places to follow for that).

Devil May Cry 5 is a fantastic love-letter to fans all over the world who cried out when CAPCOM tried to kill the series with its mediocre reboot a few years back. It wasn't as bad as everyone's claiming, but then again, mediocre for a DMC isn't the norm either. This franchise needed to come back with a bang, and it sure did! 2 Million sales within 2 weeks of release, 92% positive on Steam at the time of writing this, 90+ all around on Metacritic across all consoles, nothing but 9s and 9.5s from game reviewers elsewhere. As the Director since DMC2 Hideaki Itsuno stated when he made his appearance on the stage at E3 last year stated: "DMC IS BACK!"
Leave a comment
Screenshot Showcase 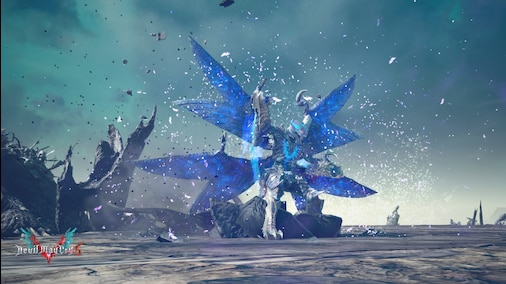