This user has also played as:
Matthew Rease 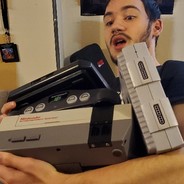 Game Mechanic
637 XP
Welcome, I'm Matthew. I've been playing video games since I was in elementary, and have an immense fascination with computers/technology.

If you want to learn more about me, I have a website at https://matthewrease.net/
I can also be found doing nerd stuff on github - https://github.com/Magicrafter13/

Feel free to hit me up and invite me to a game if you want. I can't guarantee anything, but I have nothing against it, I just tend to be busy with things.

Shovel Knight: Treasure Trove
45 Hours played
Shovel Knight is an action packed retro themed platformer, with tons of callbacks and homages to classic games from the 8 and 16 bit era.
Currently there are 3 campaigns with a fourth coming free (at the time of writing).
The original Shovel Knight story, with the classic moves and gameplay.
Plague Knight's story, which requires a bit more strategy, and careful gameplay.
And Spectre Knight, who controls much like ninja gaiden, and is more fast paced and quick-response oriented.

Levels are selected from an overworld map, but the structure is very similar to Mega Man, where you take on 8 bosses, with each stage (possibly) giving you a new ability to use, and then final boss stages. Plague Knight does not receive upgrades on a per stage basis like Shovel Knight, but it is still similar, and this also goes for Spectre Knight.

The story isn't super original, but it's pleasant, and serves it's purpose well enough. Most likely nothing you haven't seen before, but I still won't spoil it. Also has controller support, which I recommend for a game like this. Maybe keyboard works fine, but I've always played this game with a controller and just can't play it with a keyboard at the same level I normally play.

The game has an amazing soundtrack, as well as beautiful and vibrant pixel graphics. And while it does look retro, the devs don't use that as an excuse to make sub-par graphics, but instead make graphics that look similar to the old video games of the 80's, but are actually technically impossible on those old systems. Things like, way more colors, multiple levels of parallax scrolling, etc. (And it's widescreen.)

The game delivers on all fronts, and is well worth the asking price, especially if its on sale.
Leave a comment
Achievement Showcase