This user has also played as:
Jessica Power Player
483 XP
16 year old girl trying to get through her backlog.
Decent at rhythm games and has a youtube channel, Jersie, check it out if you
want 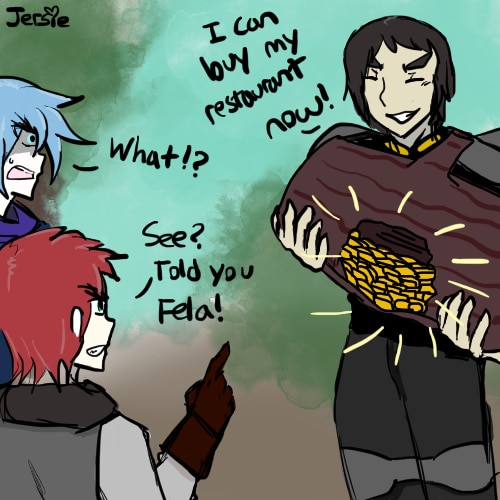 This game has its charms, but you have to be here for the journey, not the destination.
(TL;DR at the bottom)

Undefeated (not to be confused with the free superhero simulator UNDEFEATED) is a simple RPG made by Aldorea Games, published April 3, 2015.

The premise is simple, you have a rag-tag group of army conscripts that have unwillingly enlisted. Since they're newbies, no one really likes them so they set off to do their own thing and make the best of it. Unusually strange monsters start to appear in their training forests, so they get chosen to go investigate it. Which leads into a sleuth of problems for the group. It is compelling enough to keep you going, but a fair warning the story is underwhelming by the end.
Strangely enough though, in steam banner, the characters only look like that for around 2 minutes, they get haircuts in the opening cutscene and look different for the rest of the game.

I'd say the best part of Undefeated is its exploration reward system. While it gets a little stale by the end, it's still satisfying. Treasure is hidden practically everywhere in little pockets. Whether it be in logs, barrels, vases, people's homes, etc. While the items aren't incredible, they're nice. There are also a whopping 25 secret rooms to discover which have great rewards in them as well. With an additional 16 side quests to complete. Some of which are basic fetch-quests, while others have whole areas and bosses dedicated to them. It gives authentic added game-time.

The character interactions are decent, although I feel at times they under-react to things. Not too much development occurs with the characters, which is disappointing because it's enjoyable when they talk to each other. You learn about their aspirations and where they came from, but other than that they don't change significantly as people.

The gameplay, while easy, can be annoying at times. I played through on normal difficulty, and as long as you balance your healing and utilize buffs and de-buffs you should be fine. Undefeated does offer an option, in the beginning, to allow you to have visible enemies or hidden encounters. I really appreciated that feature and chose visible enemies. Though what makes it annoying is that enemies follow you around and you can end up cornered with 5 packs around you when trying to escape. Even if you hit the 'Escape' option in battle, once you leave they will be right there waiting for you and you'll just get initiated into another battle, so, for the most part, it's useless. Enemies also respawn once you leave and come back to an area, which makes progressing slow sometimes.

Another big issue is that there is no "Current Objective" viewer. You get item scraps for side quests, but for the main quest, there is nothing to remind you of your job. If you missed what the characters were saying about what to do next, or forget, then too bad!
Oh but don't worry too much, you can buy their official game guide for $4 so you can remember where to go! (Which I had to do at one point, and only used it once)

Also, sorry, I'm not one to criticize a game's art much, but in the battle system, the contrast of the game's generic cartoon enemies combined with the realistic background looks awful. Don't even get me started if you play this game full screen, the photo-background will look like a pixelated mess. While the game maps themselves are nice, this is just acid to my eyes. Good thing the maps only had minimal bugs. For the music, it wasn't bad, it didn't sound like stock music and fit the areas well for the most part.

I wish this game could've had a bit less encounters, since the battle system was not that fun. Definitely should've had a quest tracking system. It only took me around 12 hours to finish this game, but I felt like I didn't get the "true-end" as it was so underwhelming, however I am not compelled to try and get a real ending. Also the art is not too much a bother, I just wish the rest of the resources went into character development honestly.

So, if you get this game on sale, can tolerate some annoying bits in gameplay and remember where you need to go, I would recommend this game. This game has its charms, but you have to be here for the journey, not the destination.
If you got a massive backlog already probably skip this, I appreciate indie goodness even if it is rough around the edges, but if you want to make the most of your time..,.better not.

49 hrs on record
last played on Nov 21
The Binding of Isaac: Rebirth