This user has also played as:
Jesse (Jess) Pixel Paintbrush
Offline
About Me
I began gaming back in 2003 with Rugrats: Studio Tour for the original PlayStation, and it has been my main hobby/passion ever since. After the PS1 broke, I went through an original Xbox, a Xbox 360, a Wii, a DS Lite, a DSi XL, and a Toshiba Satellite before I settled down on desktop PC gaming.

Nowadays, I mainly play Halo: The Master Chief Collection. However, I also enjoy quite a few other games that I will mention below.

Feel free to send me invites whenever I'm not busy; I usually accept them more often than not. Also, I will do my best to respond to any other messages.

The Games I Currently Enjoy Playing

“The greatest accomplishment is not in never falling, but in rising again after you fall.” – Vince Lombardi

"The man who gets beat down isn't the loser. The guy who can't tough it out to the end, he's the one who loses." – Daisaku Kuze (Yakuza 0)

"Do not mind anything that anyone tells you about anyone else. Judge everyone and everything for yourself." – Henry James

"Ohana means family. Family means nobody gets left behind or forgotten." – Lilo & Stitch

"Don't cry because it's over. Smile because it happened." – Dr. Seuss

“There are those who said this day would never come. What are they to say now?” – The Prophet of Truth (Halo 2)

Yakuza 0
171 Hours played
EDIT: 4/15/2020
Towards the beginning of 2020, I had a change of mind and decided to take a shot at those final 25 CP. Just over 20 more hours put in from mid-January to mid-April, Yakuza 0 has become the 1st game I have 100% in at least a decade (don't count the 1st three seasons of Telltale's The Walking Dead because all the achievements are just handed to you for completing the story). I must say, almost all of Yakuza 0's minigames have now grown on me, even Mahjong whose 6 CP I saved for last and picked up a lot quicker than I thought. However, my thoughts on JCC and Majima's business minigame have not changed. In closing, I definitely will now consider going for 100% in at least Kiwami sometime in the future.

"The man who gets beat down isn't the loser. The guy who can't tough it out to the end, he's the one who loses." – Daisaku Kuze (Yakuza 0)

Yakuza 0 is easily one of the best games I've ever played as well as my Game of the Year for 2018. Kiryu and Majima are both stellar protagonists, and the vast majority of the other characters are amazing as well (Daisaku Kuze, whose theme is one of my favorite boss themes ever, is essentially tied with Vaas from Far Cry 3 for my favorite video game villain) . The story kept me hooked the entire time, and I even played through it a second time on the hardest difficulty, which is quite rare for me nowadays. The soundtrack for this game is solid throughout, and handily up there with the likes of DOOM and Halo for me. The substories are varied, hilarious, and fun (one of my favorites has you sneaking past the ladies in town, including the secretary of your real estate business, to buy a kid some ‘choice literature’ *wink* *wink* from some vending machine in an alley) , and Kiryu and Majima’s business minigames were overall satisfying to complete. Some of the other minigames are great as well, with karaoke and disco being the key highlights for me. The two playable maps, while much smaller than something you would find in a game series like Grand Theft Auto, are choked to the brim with detail and feel very much alive. Combat for both protagonists is quite fluid, and both boss and non-boss fights are enjoyable for the most part (Any fight with Kuze, especially the sewer fight with Kuze in its entirety, is just pure awesome) . Another thing to note is how this game is one of the best when it comes to shifting between serious crime drama and absolute hilarity. One minute you’re beating the ever living **** out of yakuza goons out to kill you, and the next you’re racing your toy car against little kids who love making fun of the announcer for still being a virgin .

I have a few small gripes with Yakuza 0, all of which have to do with minigames. First of all, Majima’s business minigame, if doing everything for it, drags on for just a bit too long. It was a lot of fun completing its main story, but doing all of the side stuff for it became a slog where I eventually just alt tabbed for each duration of the business being open (somehow not serving any guests and enraging them with my inactivity gave me several hundred more fans each time which I find hilarious). Also, the other minigames like JCC (Japan Catfight Club), the SEGA Arcade Games (excluding Out Run), fishing, pool, darts, and bowling are mediocre at best and unfun to attempt grinding the completion points (CP) for. I managed to get a little over 93% on the Completion List before I called it quits on the remaining 25 completion points, all of which involved these minigames plus casino games and Mahjong, the latter of which I have zero interest in learning at all.

Do not let my dislike with most of the minigames fool you though. They are a very small portion of what you get with Yakuza 0, and the game overall is an incredible package with many gaming memories I will not forget. This is my first game in the Yakuza series and, with 150 hours of play (which is very rare for me with singleplayer games outside of XCOM and Total War), you can consider me a Yakuza fan eager for the rest of the series to be ported to PC. I highly recommend that everyone gives this game and series at least a try; it just might be a hidden gem for you too.
Leave a comment
Screenshot Showcase 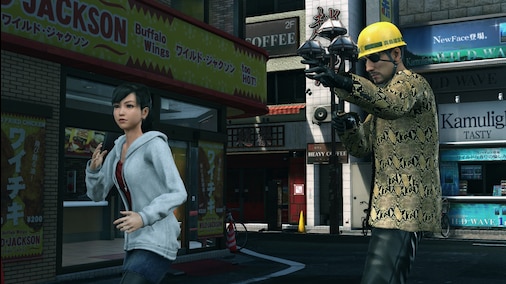 The Dragon of Sunflower and the Mad Dog of Shimano

8.4 hrs on record
last played on May 10
American Truck Simulator

1,355 hrs on record
last played on May 9
Halo: The Master Chief Collection