Years of Service
650 XP
That reviewer that was on Boston Globe [www.bostonglobe.com]
Reviewer; for ReviewExperts and IndiePromo , Evolve PR and other publications.Currently writing for multiple outlets focusing on console games

Embracer of the obscure and different.
次は負けないぞ.

Terry's paladin and worshipper at the holy altar of music and cinema, especially the dark, obscure, and strange.

As for games I like playing and sharing anything original, different, trippy, colorful, crazy chaotic, or weird. I also grew up in the arcades with a fistful of quarters and have a knack for classic and retro shoot 'em ups, beat 'em ups, and fighting games.

Warning: I play and share weird, trippy, sometimes surreal, usually pretty out-there games and am okay with that. If you can't indulge me or at least ignore me, then drop me :P My hope though, is that you're as open-minded and strange as I am and enjoy what I post and review! :D

killer7
12.9 Hours played
Killer7
The obscure and surreal mind of Goichi Suda is one the gaming world is now very familiar with, but it wasn't always that way. Before his current offering of more well-known action hits like No More Heroes or Killer is Dead, the cult gaming star had an even more niche selection of projects than he does now.

Projects like Flower, Sun, Rain, The Silver Case, or even his offbeat horror Michigan: Report from Hell stood as monuments to what free-thinking indie projects could accomplish in terms of artistic expression, but it was 13 years ago with killer7 (Are you serious? Now I feel frickin' old) that really opened the public's hearts and minds to the idea that out-of-the-ordinary "art games" like this had a place in the industry and in the mainstream realm of gaming demographics. It was a time in history when industry vets were realizing gamers wanted something "different".

Suda is very much the Jim Jarmusch or Jodorowsky of video game storytelling, his stories are often cryptic and hidden behind messages of disorder and loosely implied metaphors. killer7 isn't where it all began but its where the world took notice of one of the stranger and more obscure rising stars not only of the gaming medium, but for counter-culture and anti-establishment media entertainment worldwide. Punk's not dead, long live Suda!

The Unparalleled Styling of Suda51
The idea of having killer7 again on PC is more than enough to get my hype, as this was one of the titles that really got me into the medium of games as storytelling as a high schooler, one of the first titles that showed me games could be something more than just an edgy action romp or a stereotypical RPG narrative. killer7 was my earliest realization that games could tell the same sort of cerebral and thought-provoking narratives that I sought through international cinema

To be precise, killer7 starts off feeling almost like a slow-burning old Noir film, like a classic Yakuza flick or similar gangster film heavy with darkened nighttime cityscapes and chases through shady evening streets. The boundaries between realities begin to blur and like a psychological Sogo Ishii movie the story weaves in and out of the various realities throughout the many personalities and characters that exist within Harman's head.

All of the trademark oddities of a Suda51 title are here, in fact many of those trademarks were probably conceived here in what would be considered his first real head-turner, being the title that gained him the cult-ish notoriety he now is known for. Plenty of blood, stylish punk rock aesthetics, some seriously dark black humor, and a psychological storyline that penetrates the very mind of its afflicted protagonist(s).

Gameplay and Gunplay
Much like its storyline the gameplay in killer7 is incredibly unconventional, very slow-burning in execution, but ultimately and incredibly provocative and satisfying experience for those with the patience and knack for weird, strange sorts of mechanics. This is not your average shoot'emup despite the heavy gunplay, and gamers looking for a more typical action experience are going to be disappointed; the mechanics here are nearly as cryptic and cerebral as the story within.

For starters there's no free range of movement. killer7 is very much an on-rails experience and the only real choice you have is the decision to change directions. This sounds like a bummer but it gives the game more of a classic dungeon-crawler sort of a feel where the encounters with enemies come at you with each new room, and each new room advances the hypnotic story little by little. You'll still hit plenty of forks in the road and detours to strongly consider with plenty of surprises waiting at the end of each one, and more than enough bizarre recurring personalities to meet along the way.

The focus of killer7's action is in the showdowns you have throughout various rooms with the mindless monsters of 'Heaven's Smile', and the unique way in which you'll dispatch them using each of the 7 killer personalitie's traits. Using collected vials of blood, carefully and deliberately as it is a pretty rare commodity, you'll be able to employ charged shots, instant killing knife strikes, or even some pretty sweet wrestling moves to carefully plan the demise of massive boss creatures.

You won't be relying so much on reflexes or speed to mow down waves of enemies here, killer7 is a much more careful and slow approach much like its presentation; it demands careful and steady deliberation of the placement and order of shots. Almost like a strange hybrid sort of puzzle game with the timing and fine-tuned aiming requirements of the action genre, you'll carefully consider when and where to employ these specific abilities of each of the 7 killers and target weak points in a proper and logical order.

To be perfectly honest even attempting to describe killer7's peculiar and disordered gameplay is a chore, as just like the feeling conveyed by its style and presentation there really are no words to capture the otherworldly and strange feeling instilled. It's very much something you have to see to understand, or even believe, and once you do it all sort of comes together in its own messed up way. Isn't that the beauty of Suda's games?

Final Thought
Split personality killers, crazy luchadore assassins, brainwashing religious Doomsday cults, and plenty of bondage via the lovable and trustworthy Iwazaru are just some of the many set-pieces and personalities you'll come across during your hallucinatory trip through these city streets filled with conspiracies and hired murderers.

Yes, this is a very barebones port with very little if anything at all in the way of options or settings. However, it's still a very competent port with every modern setting you would want included to bring this cult classic into the modern age including 4k resolution and proper controller support out the gate.

There isn't much more I could even ask for than that when it comes to an often talked about but rarely revisited classic like this, and I sincerely hope to see Flower, Sun, Rain and Shadows of the Damned get the same treatment eventually.

This review made possible through the generosity, consideration and contribution of Review Experts(REXnetwork) and the developer/publisher. 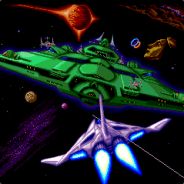 3.1 hrs on record
last played on May 26
Getting Over It with Bennett Foddy
Achievement Progress   0 of 3
Screenshots 11

4.7 hrs on record
last played on May 14
Halo: The Master Chief Collection
Achievement Progress   6 of 700

ڿڰۣ Just a little visit to

~And a A little word of wisdom ~