This user has also played as:
Tiger "Ace" Schültz Years of Service
450 XP
You will know a person not by their name, what they say or how they look, but by their actions.
View more info
Currently Online
Badges  24 Company of Heroes
1,004 Hours played
Have been playing this game since 2006, it's a Real Time Strategy game developed by Relic Entertainment and published by the now bankrupt THQ, based on the Essence Engine 1.0 which itself is a brand new engine inspired by the Impossible Creatures one which Dawn of War also used, albeit a modified version.

At the time of mostly stuff like Age of Empires, StarCraft and Warcraft were the dominant strategy games, CoH broke that mold by doing away with economic gathering and management by simply replacing it with a sector capturing system which generated resources for the player instead of stuff like wood, stock, gold and so forth you have Manpower which pays for your units, Ammunition which pays for your upgrades and abilities and finally Fuel, which pays for your buildings, some emplacements and your vehicles. Dynamic cover, something which only craters in Dawn of War provided and also destructible terrain, for the first time ever in a physics based RTS game were you allowed to create, destroy and use cover, your units could build sandbags, tank traps and emplacements, Tank and Artillery shells as well as stuff like satchel charges made shell craters on the ground giving your infantry light cover which helped them in the late game, I've often times had matches where the map looked like a side of the moon even.

The Armies and units themselves are also memorable and full of character, their voices, the sounds, the accents, the explosions, the graphics, the game holds up pretty well even by being from 2006.

Apart from that gameplay wise, the Armies are designed symmetrically to one another, with the Panzer Elite and British Commonwealth introduced in Opposing Fronts in 2007 being a tad different.

The US Army has your standard 6 man Rifle squad that can be globally upgraded with BARs and Grenades from the barracks, 3 man Engineer Squad that can build tank traps, wire and demo charges (albeit you'll need an unlock from the HQ) and of course "Elite" infantry in the form of the doctrinal Rangers from the Infantry Company and Airborne from obviously, the Airborne Company. Tank wise you have the M4A3 Sherman, the de-facto "workhorse" of the Western Allied Armies, the M10 Tank Destroyer or M18 Hellcat (if you have Tales of Valor) and the Sherman Crocodile flamethrower tank equipped with a bulldozer capable of breaking tank traps and hedgerows. Besides the aforementioned Infantry and Airborne Companies, you also have the highly aggressive and mobile but slow to build up tank Company which gives you access to the M26 Pershing and M4 Sherman Calliope and also allows your light vehicles to capture sectors.

The British Commonwealth is probably the most difficult to learn and master Armies of the game, being very defensively oriented but also arguably "mobile" because of their 3 HQ trucks, you have the hardy 5 man Infantry Section all armed with Lee-Enfield rifles initially at the hefty cost of 450 manpower who can build emplacements as well as trenches and be upgraded to either double Brens or Rifle Grenades. Sappers can be called in from the 2nd Infantry Support HQ truck and are your main builder and repair unit, they have additional emplacements in the form of the Bofors, 17 pounder (your only AT gun) and 25 pounder. They also have their 2 officer units, the "Leftenant" and Captain, each required to be fielded in order to unlock the next HQ truck. Commandos are another Airborne like infantry unit that can be called in via glider from their own specific Regiment. Vehicle wise the British I would say are in a better spot than the US Army, you have the Cromwell which is basically like the US M4 Sherman but without a .50 cal MG upgrade and with a lower profile and is a bit faster, while the M4 Sherman Firefly is probably the best Tank Destroyer in the entire game with it's 17 pounder gun, combined that with the Cromwell Command Tank, the "officer" vehicle which is required in order to unlock the Firefly, is a deadly combination. They also have access to the M7 "Priest" Self-propelled gun from the Royal Canadian Artillery regiment which also improves your Mortar pits as well as 25 pounder emplacements and finally the Churchill and it's 2 variants, the flame-throwing Crocodile variant and AVRE from the Royal Scottish Engineers Regiment. Experience wise the British are also unique as only their officer units (the Cromwell Command Tank in the vehicle case) can rank up and provide auras around them that "buff" nearby units, take in mind tho that having the Staghound Armored Car enabled in the reward vehicle tab replaces the Command Tank, so I advise taking it if you're planning on going Firefly heavy.

The Wehrmacht is the standard 1944 German Army with concrete buildings and their 5 man Volksgrenadier squads which can be upgraded to MP40s and having access to the Panzerfaust, they can also stack sandbags and build barbedwire, the 2 man Pioneer squad which is the basic repair and builder unit and the Grenadiers, a 4 man squad that gains an "Elite" status upon reaching veterancy level 3, capable of being upgraded with MG42s and Panzershrecks but come with standard Karabiner 98k rifles like the Volks, but of course are more skillful with them. Lastly there are the Knights' Cross Holders which are your top of the line 3 man StG 44 armed "Elite" anti-infantry squad which doesn't excel at much else, of course apart from them there are the doctrinal Stormtroopers from the Blitzkrieg doctrine but they are mostly better and more expensive Grenadiers that can just cloak, for the most part. Tank wise the Wehrmacht has the better tanks of the 2 German Armies, having the standard long barreled Panzer IV medium tank, Ostwind, StuG IV Assault gun and more or less the Puma which isn't really a tank but still, is a nice flexible vehicle to have in any Army composition, and finally from the Blitzkrieg doctrine the StuH which is basically the StuG IV but armed with a 105mm howitzer, the Tiger, my personal favorite, and from the Terror doctrine the King Tiger, which can be only called in once so that's that if you lose it. You also have access to the Flak 36 88 mm gun from the Defensive doctrine, a very deadly and long ranged stationary piece that can knock out both vehicles and planes with extremely precise accuracy, as if you're hitting a fly with a hammer almost. They also "buy" their veterancy instead of earning it from the Kampfkraft Center.

And finally we have the Panzer Elite, my favorite overall Army, vehicular based and highly mobile, they guzzle fuel like it's nothing, both for their vehicles and Panzergrenadier upgrades. Unlike other Armies the PE only have one type of infantry, the aforementioned Panzergrenadiers, and their 2 variants the Assault and Tank Buster PGs. Starting out as a 3 man squad they can be upgraded to 4 men and several upgrades that allow them to cap and repair faster and last longer when facing Machine Gun fire due to their suppression. Other infantry units are the doctrinal 5 man Luftwaffe Ground Forces squad which can build Flakvierling 30/38 AA guns and later the 88 and lastly the Fallschirmjagers which are again "Elite" infantry. As far as vehicles go, and they are a lot, you have your Infantry Halftrack based on the Sdfkz 250 armed with an MG42 that can suppress enemy infantry and reinforce your own, a mortar variant based on the same vehicle as well as one armed with a 37mm AT gun which sort of acts as the Army's "sniper" so to speak. Vehicle wise they have the Panzer IV support tank, Marder III Tank Destroyer and doctrinally the Hummel SPG from the Scorched Earth doctrine, Jagdpanther and Hetzer from the Tank Destroyer doctrine and the Wirbelwind from the Luftwaffe doctrine. In Terms of experience they are also unique as each level can be customized with "Offensive" and "Defensive" choices.

This is my personally favorite game, not just WW2 but also RTS one, and I will continue playing it until the day that I die.
View all 6 comments
Artwork Showcase 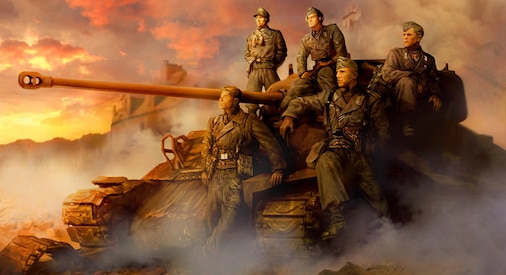 Tiger Ace Crew on a Firefly 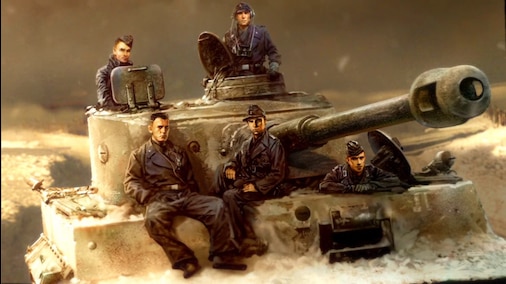 Farot21 Jun 8 @ 4:45am
Yeah, i bought all of them and i also got the Girlfriend mode, THis only fan is a gold mine

VeteranOxygenInhaler Jun 7 @ 3:02pm
hey, sorry I saw your profile and I just thought you looked cute in your picture, I really wanted to tell you that)) It's really rare to see girls playing video games haha! I don't know why its a guy thing honestly im like really against misogyny and like ill be the one in the kitchen making sandwiches. We should really play l4d2 sometime its a really cool zombie game with a lot of scary moments, but don't worry ill be there to protect you ;) sorry that wasnt flirting I swear Im just trying to be friendly I really like your profile picture sorry was that too far? Really sorry i'm really shy I don't go out much haha add me on skype we should talk more you look really nice and fun xxx

jbmarines Apr 6 @ 5:41am
I reached out to him, hopefully we can make something happen
< >