This user has also played as:
Leon Blyat 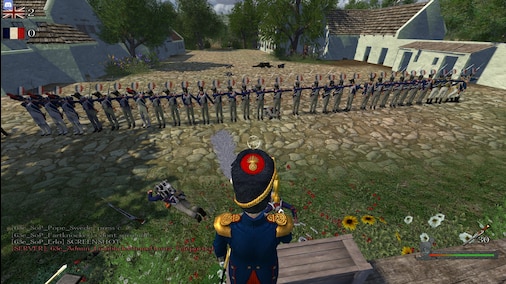 Mount & Blade: Warband
2,656 Hours played
This is hands down one of the most unique games I've ever played, play to this day...

Pros (Native/Warband):
-Wide range of things to do
-Diverse Weapons
-Diverse Factions
-Challenging
-Great Multiplayer
-Amazing Modded Community
-Amazing DLC
-1000+ hours of content to do in campaign and the DLC's/Mods
-Great Community
-Unlike many games that are popular today
-Great use of tactics
-Clans and others to play against in Mulitplayer, which is great to play to improve skills immensly
-Can be played whenever you want, and will start off where you left it.. if you save of course
-Has option to do hardcore mode where you don't have to save so if you quit you restart.... if you choose (Personally believe choosing not to save is hardcore mode in itself)
-Diverse playing against AI and how hard or easy you wish to make them
-Does not reqiure a high graphics card

Cons (Native/Warband):
-Can become boring after a while
-Will either appeal to you or not... depends on gaming style
-Hard to learn at the start
-Many Elite players on mulitplayer
-Die-hard fans that can get into heated debates
-Some people can ruin game experience...(try to ignore or mute)
-Campaign can be repetitive (factions are little different but not very diverse besides weapons... unless you download mods to fix)
-No actual storyline, you choose it really... but can be limiting to what character build you want

Pros (Napoleonic Wars)
-Even more unique than Native
-Realistic clothing and weapons
-Many regiments that hold events to go to
-Has many gamemodes to explore
-Fun to play over and over
-Accurate to the time period
-A lot of time and effort placed into the game
-Dynamic and Complex melee system (Depending on how far you wish to improve)
-Realistic shooting with muskets, rifles, pistols, etc.
-Ability to shoot a cannon that can tear up lines of people, walls, and anything in it's path (can go through trees and rocks no problem, including a Howitzer to shoot over the battlefield and a mortar on siege maps to go over the walls entirely and bombard the hell out of the enemy)
-You can be a pirate or sailor of course
-Play as historical figures of the 5 nations... (France, Russia, Prussia, Austria, and Britain/United Kingdom)
-Does not require a high graphics card
-Play different classes with their own unique bonuses and weaknesses
-Did I mention ship battles? You can sail giant Galleons or tiny Dinghy's and be of a ship crew, either as pirates or sailors of your selected nation...

Cons (Napoleonic Wars):
-No longer updated
-Lots of regiments recruiting for their communities
-Trolls (of course all games have them...)
-Sailors or Pirates whatever you prefer... only able to be played on France or United Kingdom
-Can become glitchy from time to time
-Players who will talk smack in chat all the time, and will judge you sometimes on how you play (Just ignore them, you can mute them of course in game thanks to Mount and Blade's wonderful mute player button....)
-Shooting is a gamble and can miss right infront of you and hit from across the map
-Most servers will ban if not listening to rules and will do their best to recruit you... (if you wish to join choose wisely...)
-No Single Player (Mod was made for Native called L'Aigle to have a single player Campaign of Napoleonic Wars...)


Overall I give this game a 9/10! I've been playing this game since it came out and spent 1,773 hours on the game... There are people who are more dedicated but I love this game and hope to see it thrive in the future.... (Bannerlord wink wink)....

P.S. I haven't really explored Viking Conquest so didn't do a major review on it... all I know is there is a real campaign in Viking Conquest which was an awesome change... (That still gets updated but takes a few months to occur)
Leave a comment
View all 66 comments < >
Comments

CaptainKaspurr Jun 27, 2020 @ 8:55am
We regret to inform you that your Credit Card titled "Mum's Visa" has been declined, any of your latest purchases will not be processed due to suspicous activities. To unlock your card for further use, please confirm your recent purchases and total cost with your local bank.


Please respond back to us using your old email:
i_love_black_♥♥♥♥@hotmail.com

WE TRUE SCHLOMOS
WE JEW TOGETHER
WE GET HOLOCAUSTED TOGETHER
Send this SHEKEL to everyone you care about including me if you care. C how many times you get this, if you get 6,000,000 your A TRUE SCHLOMO

PlzRe-electMe Feb 18, 2018 @ 9:25pm
We regret to inform you that your Credit Card titled "Mum's Visa" has been declined, any of your latest purchases will not be processed due to suspicous activities. To unlock your card for further use, please confirm your recent purchases and total cost with your local bank.


Please respond back to us using your old email:
i_love_black_cock@hotmail.com