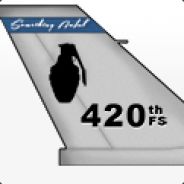 Check links on the right.


BMS is a guy who's been having sex for fifteen years and knows a million ways to surprise you and keep it fresh in the bedroom. But he's not very good looking and sometimes loses consciousness for no reason.


DCS is a super hot guy but he blows his load quickly and doesn't really know what he is doing.

I just copy pasted this. Basically in about 3 hours and 10 minutes we start.
Air Goons Discord here: https://discord.gg/eQJcbuF

WHO: Goon pilots one step above the ''aggressively incapable'' stage
WHAT: A fairly simple DCS Caucasus mission of SU-25T's, A10Cs, and Viggens performing SEAD and a Strike, with some F-15C, Harriers, Mirages, MiG29ss for escort.
WHEN: Saturday the 28th of April, at 1400 EDT, which is 2000 UTC
WHERE: LAME Goon Aviation server, will be hosted during the event.
WHY: Merica.

SEAD IN THE VALLEY!
[


SU-25T is a free plane. Once again, no money needed for this! If you are a total beginner, you are still encouraged to join with the free client, and free plane

Situation: War has broken out in the Caucasus. Russia has declared war on Georgia, and after initial gains by NATO, such as capturing the city and airfield of Sochi, the Russian Radar Air Defences that were snuck into the area are dominating the air space. Georgian Su-25Ts, the FREE PLANE IN DCS OMG FLY IT PLZ, are tasked out to carry out SEAD and DEAD in order to defeat the Russian AA threat. The enemy ground forces are currently making their way to the city down the coast, along the two main roads to the west of the city. Secondary objective is to prevent the enemy forces from crossing the bridges into the city. If they gain a bridgehead, we will need to destroy the bridges. They are not estimated to arrive until an hour after mission start time.

Friendly Forces: Only a small contingent of NATO has arrived, with a forward deployed force of 8x F-15Cs jointly from Israel and the US, 4x Mirages from France, and 4x Mig29Gs from the German Air Force. 8x A-10C are also at Sochi airfield. Alongside are Gazelle, Huye, and KA-50 helicopter.The mission of course has respawns, and a friendly AWACS will be available for calls. There'll be a tanker, too. If one human wants to volunteer for being the AWACS dude, that's great too.

Task: Suppress and Destroy enemy AA-capability in the caucasus region between waypoints 1 and 7. Destroy all encountered enemy ground units. Protect the SEAD and CAS planes. Protect friendly Sochi-Adler Airbase. After SEAD starts to wind down, the Su-25Ts can perform regular CAS.

Estimated length of the whole mission is roughly an hour and half. In addition,a separate US package from a different airport in AI control have tasked out to assist in SEAD.
SEAD is vital in this mission. Enemy RAA covers vast areas, and if there aren't at least two competent SEAD dudes in froggies, this would be a massive bitch.


Before the start time of the event, the server will be running free for all air start shenanigans with all kinds of planes.

Malevolent Dec 21, 2014 @ 11:08pm
Going away for Christmas, but with things settling down finally with the whirlwind shitstorm of the last 2 months, I'm hoping to get back to some flying again.