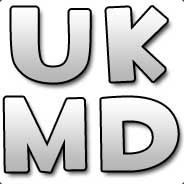 ~~~~~~~~~~~~~~~~~~~~
A Little More About UKMD
~~~~~~~~~~~~~~~~~~~~
Also quite interestingly, every UKMD member gets a limited amount of admin privilages, its been the norm for people to pay for such rights, here you get them free and you can also cruicially you can feel at ease, that there is only small group of admins, the 'core admins' (MoggieX's select few) that have the access to any player abuse commands. There are no pay-for-admin and attached abuses here.

You can play in realtive safety, knowing that the server you're on is patrolled by a what can only be described as an 'army' of admins. We have members from the ages of 9 to well past retirement, probably with an average age twice that of other clans, a prime example that this is no ordinary clan, or community as I like to put it.

They were.
They really were.

A quick burn,
fun in front of the fire
or
for just fun, fire 'n frolics.

Strider Mar 27 @ 11:01am
what ever happened to UKMD? Seems like a life time ago I was playing on the servers with the usual's