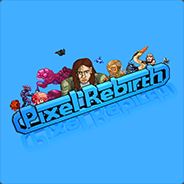 This is a group for friends and supporters of the indie game developer known as Pixel Rebirth.

Get the latest infos on current game projects, help out with playtesting and even win some steam redeemable games.

Last year I announced NCD on this same day in November, this time I have created a game called Weaklings[gamejolt.com] for the Asylum Jam.

Don't expect too much, this was done in 48h after all. It's certainly spoopy though.

And thanks to Gheist for the magnificent music track and sfx!

I kind of set a task for myself to create a horror game during the course of October. Unfortunately I wasn't able to finish it quite for Halloween, but it is ready to be downloaded and experienced right now.

Head over to GameJolt and play NCD: