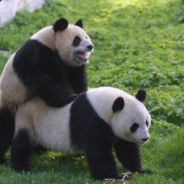 A baby panda may have been conceived at Ocean Park in Hong Kong while the zoo is in lockdown due to coronavirus.

Two resident pandas, Ying Ying and Le Le, managed to successfully mate on Monday morning - and they've been struggling for a while.

The zoo says the pandas have been making attempts since 2010 with little success, but managed to succeed through "years of trial and learning".

With Ocean Park closed to the public, the pair made the most of the privacy.

Michael Boos, the executive director of conservation at Ocean Park says staff at the park are excited by the prospect of a baby panda.

"The chance of pregnancy via natural mating is higher than by artificial insemination," he says in a statement.
Le Le the pandaimage copyrightOcean Park Zoo
image captionLe Le has had other things to do than mating - like eating bamboo

Mating season for pandas happens between March and May, so Ocean Park's vet team have been on the lookout for signs of mating.

The zookeepers kept close attention to the panda's hormone levels to see when they're ready to mate.

In late March they began flirting in panda fashion - Le Le left his scent markings and sniffed for Ying Ying's scent, while Ying Ying began playing in water.
Only 1,800 in the wild

Panda pregnancy can only be detected by ultrasound around 14 to 17 days before birth.

The pregnancy can last for up to 10 months, so it may be a while until staff at the zoo know the results of this attempt.

Conservation centres are keen to encourage pandas to breed as they are vulnerable to extinction. According to the World Wildlife Organisation (WWO), there are just over 1,800 left in the wild.
The problem with pandas

Pandas face a few difficulties when it comes to breeding.

Female pandas only ovulate once a year for a short period of time, so male pandas have to detect this quickly to successfully conceive.

Male pandas can also struggle with how to actually mount a female for breeding, which also reduces how much time they have to breed.

Some studies even show that pandas have to be attracted to one another to breed, which is difficult if they don't have a lot of options.

Zoos usually opt for artificial insemination to overcome these issues, and what's happened at Ocean Park is uncommon.

Despite this, breeding efforts are not in vain - in 2017, the status of Wild Pandas was upgraded from 'endangered' to 'vulnerable' by WWO..

Are pandas endangered 2020?
Wild panda numbers are finally rebounding after years of decline. In September, the International Union for Conservation of Nature announced that pandas have been upgraded from “endangered” to “vuln0rable.”