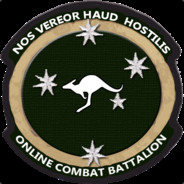 On expansion OCB has a Support Company and Armoured Troop so that members can be permanently assigned to a specialist role. 12 Months service in rifle company as a rifleman is required before being considered for specialist roles.

We conduct training in Infantry, Armour and air operations using instructors with real life experience. Training is conducted on a regular basis and tactical missions are held once a week.

Our Tactical Operations are conducted in a variety of locations (maps) and some mission are part of a longer series or campaign. Our missions involve minimal mods, with a standard set being used on most occasions.

OCB is not a strict milsim group (because we are adults not 12 year old wannabes) but we have organised gaming that is professional and enjoyable. No one is going to ask you to undertake drill lessons, yell at you or carry on like an idiot. We have a rank system and awards for service.

Our Code of Conduct and other vital information can be viewed on our site.

Online Combat Battalion is always recruiting. OCB Seeks ADULT players, who understand TEAMWORK and are in Australia, New Zealand or similar timezone (provided of course they speak and understand English)

We also play a range of games other than Arma, mainly FPS but some RTS titles as well. This is an active and fun community to be a part of. Come and join in!

We have two servers running the SOG Prairie Fire DLC, and the servers are cracking!

Get into discord and join us: https://invite.gg/ocb

Nov 28, 2017 @ 3:51pm
Aaaand he's gone. Courtesy of contacting someone would have been nice Griffin. Good luck finding what you're seeking.