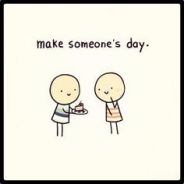 STEAM GROUP
Be Kind Be Kind
Request To Join

It's Nice in Here

Here's the idea behind the group: people can be shitty. People can be especially shitty online, where there is anonymity and a lack of consequences. Either this has gotten worse over time or I've just become more attuned to it as I've gotten older, or maybe I've spent more time in questionable communities. The internet just seems, at least to me, like a more cynical, prejudiced, heartless place than it used to be.

But...the internet can also bring people together, allowing friendships to be made between people who would never meet in the real world. Anonymity is also an equalizer, and it's just as easy to perform a random kindness for someone on the other side of the world as it is for your neighbor. I've seen this--people being kind and decent, for no reason other than the belief that kind and decent is a good way to be--and I was inspired to start this group.

I invited some of those people that I had seen behaving like decent human beings, along with some people who seemed to hold similar beliefs. And they invited people who were decent, and so on, and here we are. What I hope is that this is a place where people can let their guards down just a little and treat each other with respect and kindness. It's not a place for judgment, or religion, or a specific code of ethics. Just...be kind.

Invite your friends, if you like it here and you think they'd like it as well. Don't invite your whole friends list, because the point of the group isn't to grow as large as possible. The point is to foster a community based on mutual respect and the knowledge that, ultimately, we're all in this together.

One of my favorites! https://www.humblebundle.com/store/brutal-legend?hmb_source=brutallegend_freegame&hmb_medium=banner

lada_ Jun 5, 2019 @ 3:13am
If you have not seen this yet & you care about the gaming industry, and if you care about supporting humans, you might want to give this a thoughtful watch. https://youtu.be/4xTDVlNGKng