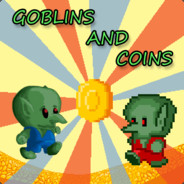 Run and jump, collect coins, confront enemies and avoid traps, open gates and find secret stashes. It's a simple 2D platformer with a twist: You're not a hero from the castle about to slay an evil dragon, you're a goblin cook working for the dragon! It starts slowly but things get more and more complicated as you go.

Story:
Your master has been robbed by a pesky rogue, and it's kind of your fault. Follow them through 5 different settings, from the dragon's lair in the Fiery temple of Doom, all the way to the Castle Keep, and return the stolen treasure! But beware, the closer you get to civilization, the more dangerous it becomes for a defenseless goblin.

Features:
* Over 35 levels filled with enemies, traps and secrets.
* Unique game mechanics for every world.
* World map - know where you're going!
* Two difficulty settings (casual & old school).
* Ability to save & continue later, for casual players.
* Keyboard (You can rebind the keys) and gamepad support.
* Cool music by Kevin MacLeod

Please note: Moderators are notable members of the game community (speed runners, frequent event participants, guide authors and such). Don't bother them with bug reports or similar matters, they can't help you with that as they are not game developers. If you have problems with the game, post in official forums on steam community.

Official website[www.goblinsandcoins.com]
Newsletter[docs.google.com]
Developer page
VIEW ALL
POPULAR DISCUSSIONS
VIEW ALL (139)
RECENT ANNOUNCEMENTS
Another confirmation for SteamDeck, this time it's a video
May 8 - NB264 | 0 Comments

Really wish steam would allow us to post pics in these announcements.