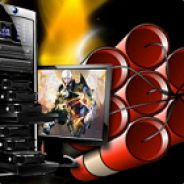 Join our group & stay up connected with your friends!

DO NOT POST ITEM RAFFLES OR TRADE SITES ANYWHERE IN THIS GROUP'S DISCUSSION OR COMMENTS AREAS. DOING SO WILL GET YOU BANNED AND YOUR POST WILL BE DELETED IMMEDIATELY, SO DON'T WASTE YOUR TIME!

Founded in 2005, BOOM! is a world-wide gaming community based on the west coast of the US. We welcome all friendly gamers who want a place to relax and chat or get help to sign up on our website too. Trolls are not welcome! For over 10 years, BOOM! hosted TF2 and CS:S game servers. The TF2 servers we're modded community servers and allow players to have fun and casually trade. They we're not geared toward official competitive play. In late 2017, Lt. Maverick, the owner founder of BOOM!, shutdown the game servers for reasons outlined here:

Joining this group will help you to stay connected to the players who once played on our famous Valve game servers and like to share info and memories of the good times we had.

Have you been missing the old days of hanging out, killing each other and trading on the BOOM! Minecraft server? Do you long for the days of jumping back on the a BOOM! Achievement Idle Server and and playing your old favorite map Achievement Idle AwesomeBox9? Well, I have some good news for you if you do?

One of our Admins, BOOM! Auth (AKA: Good Ol' Grandpa Sniper), has revived these two servers for our members to play on for a while. Below is the info to join them:

The Minecraft trade server has a slightly different map, but unless you explore the hidden lava area through a portal in your spawn area, you would never know it's different. Besides, who wants to hide and not kill your enemy!

So grab a friend and jump into one of these servers if you want to go back in time for a visit to our past.

BOOM! will be hosting some weekend and evening reunion parties in the servers in the near future so keep an eye out on your steam for the announcements.

Many thanks for Auth bringing the servers back up for us to play on!

An update to Team Fortress 2 has been released. The update will be applied automatically when you restart Team Fortress 2. The major changes include:

All players who launch the game will receive a Soul Gargoyle if they don't already have one:

- Grants access to Merasmissions and Halloween item transmutations
- Tracks Merasmissions completed and souls collected
- All Halloween Contracts have been reset, allowing them to be completed again
- Continue last year's event by collecting the souls of dead players for your
- Soul Gargoyle by killing enemies, doing map objectives, or collecting the
- Soul Gargoyles that spawn in the maps

Nov 25, 2020 @ 6:46pm
Great hearing from you Katmoo! Those were great times! Don't hesitate to stay in touch and keep us all posted on how you're doing. Friendships made here will last forever!

DenimRed Nov 24, 2020 @ 7:17pm
Ah, still have fond memories of that one minecraft trade server, would spend all day every day on that back when I had more time. Met a lot of fun people. Also remember when I got banned for a bit, good times!
Haven't played TF2 since the servers shut down, but I'll keep my eyes out for that potential reunion get-together. Thanks for giving us one of the best communities I've ever been in, Mav! And thanks for putting up with all of our antics for as long as you did, too.