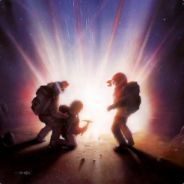 Adventurers of the Steam unite!

Adventure games have existed since the beginning of gaming, from the text version to the graphic adventurers. They're often called dead, but as every genre the adventure-genre had its ups and downs.

Many developers are still making great examples of those games today.

This group exists to unite those players that share a passion for the classic Point and Click-Adventure.

It seems old school fans of the adventure genre are not done being treated with nostalgia bombs.
30 years after the original two Simon the Sorcerer games came out, a prequel is on the horizon.

Responsible for this revival is the Italian Smallthing Studios. A studio which has eight games in development and only published a World of Gumball mobile game for Cartoon Network, but is seemingly responsible for those 'playable adds' for mobile puzzle games you see everywhere.
Their website does boast partnerships with large IP holders, so they managed to gain trust.

They claim to be the owners of the development license for the Simon the Sorcerer IP and that this is an 'official' prequel.
I'm honestly not sure how that works, since Adventure Soft, the developers of the first three games in the series, still exists and owns the rights to those games.
Silver Style Entertainment, which made the fourth and fifth installments has been defunct since 2009. And the last we heard of the franchise was the failed Kickstater for a sixth installment by StoryBeasts in 2016.

There's also no word on who's involved, Mike and Simon Woodroffe are not mentioned anywhere.

The game is a prequel set a little while before the events of the first Simon the Sorcerer and will tell the story of how exactly Simon ended up in the fantasy world the franchise takes place in.

It has a terrible logo, but an otherwise great art-style, and it's coming out sometime next year.

Back on April fools, Ron Gilbert made an announcement on his blog saying he was working on a new Monkey Island game. Despite Ron Gilbert always being vehemently against April fools, this did seem to be too good to be true.
But now, today, a trailer dropped for 'Return to Monkey Island'.
A game being developed by Ron Gilbert's own studio Terrible Toybox. The chances seemed slim after Disney's acquisition of LucasArts along with the entirety of LucasFilm studio's. Slimmer still after Disney shut LucasArts down, only to revive the game division as LucasFilm Games.

Strangely this game isn't being published by Disney, but by Devolver Digital, a publisher known for creative, high quality indie titles who generally let the studios do their own thing.
Ron Gilbert has always said he wouldn't come back to Monkey Island unless he had full creative control. And that seems to have been given to him now.

Return to Monkey Island will be a sequel to the games Ron Gilbert designed, so The Secret of Monkey Island, and it's sequel Monkey Island 2: LeChuck's Revenge.
Although a talking skull reminiscent of Murray is featured in the trailer, despite Murray only being introduced in The Curse of Monkey Island.

Along with Ron Gilbert, fellow Monkey Island designer/writer Dave Grossman and composer Peter McConnel are also back to lend their talents to the pirate adventure once again.

The trailer also confirms Dominic Armato is back as the voice of Guybrush.
As well as a releasedate sometime this year.

Not much else is known, but keep an eye on the website[returntomonkeyisland.com] for updates.

Saena Feb 6 @ 2:54am
Hello fellow adventurers! And a lovely Sunday to you all!

Tyler Durden Sep 15, 2021 @ 12:04pm
I supported the game "Plot of the Druid" on Kickstarter. Now even an English voice output seems to be in danger, as this stretch goal was not achieved. There is still the option of refinancing. Here is the link to the website:

It would be a real shame if the game had to do without voice output at all. Maybe there will still be adventure enthusiasts and sponsors?

Many greetings to all Point & Click Adventure fans
Tyler

For all friends of classic point and click adventures there is a very interesting Kickstarter campaign and a free demo here on Steam. I also wrote a review for the demo, maybe there will be people interested in supporting this campaign. I'm curious what kind of game will come out in the end.