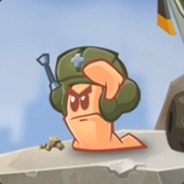 Hello Wormers!
Welcome to the group!

I created this group so we can can all get together for some Worms W.M.D action when it launches later this year!

We'll be organizing tournaments, chatting with you all and there'll probably be a competition or two along the way!

Time for introductions! I'm Danny, one of Team17's Community Managers and I'll be joined in this group and in the forums by Jonno, the other Worm kicking half of the Community team duo. Feel free to add us to your friends lists so we can catch a game of Worms every now and then.

Team17[www.Team17.com]
Worms Facebook Page[www.facebook.com]
Worms Twitter
VIEW ALL
POPULAR DISCUSSIONS
VIEW ALL (5)
RECENT ANNOUNCEMENTS
Worms W.M.D Out Now!
August 23, 2016 - Danny | 2 Comments
We're Mighty Dangerous!
The worms are back in their most destructive game yet. With a gorgeous, hand-drawn 2D look, brand new weapons, the introduction of crafting, vehicles and buildings plus the return of some much-loved classic weapons and gameplay, Worms W.M.D is the best worms experience ever.

Work your way through 30 campaign levels of increasing difficulty using the huge arsenal of new and classic weapons at your disposal. Use new vehicles to cause chaos amongst the enemy ranks and use buildings to gain the tactical advantage as you try to dominate the battlefield!

Take on up to five opponents in hilarious all-out tactical worm warfare with up to eight worms each, either in local or online multiplayer, including ranked play. Flatten your opponents with the Concrete Donkey. Turn them into chunks of worm meat with the Holy Hand Grenade. Rain down hell from above in helicopters or pound them into oblivion with the tank. With 80 weapons and utilities at your fingertips, this is Worms at its chaotic best!

Join us live on stream tonight!
To celebrate the launch of Worms W.M.D we're going to be hosting an epic 2 hour stream at 6:30pm BST.

Join us to watch the action unfold, take us on at Worms W.M.D and enter our competitions to win exclusive Worms W.M.D loot including plushies, key-rings and badges!

Join us here: {LINK REMOVED}www.twitch.tv/team17ltd at 6:30pm BST and be part of the action

Thank you to everyone that has followed Worms W.M.D since we announced it last year. Your support and enthusiasm has been simply amazing. We really hope that you enjoy the game!

Read More
Worms W.M.D - Classic & New Weapons Trailer!
June 30, 2016 - Danny | 0 Comments
Are you ready to unleash over 80 weapons in Worms W.M.D?
From your favorite classics to new, inventive and intriguing weapons to get your destructive juices flowing the Worms are ready for war!

Oh, there's also now an Orbital Satellite than melts land...keep an eye out for that one.

rorybecker Dec 31, 2017 @ 3:52am
Can someone please indicate the maximum turn time for a locally based match? Thanks