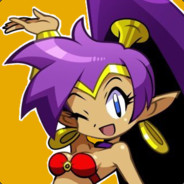 SHINOS YOU WANT CABELA'S BACK
View Profile View Posts
Dec 30, 2013 @ 7:48pm
Shantae: Half Genie Hero Awareness Competition
!!!!MAKE SURE TO READ ALL OF THE WAY THROUGH! EVERY BIT IS IMPORTANT!!!!!

HGH the third in the Shantae series from Wayforward, the brilliant behind the Mighty Switch Force games, Ducktales: Remastered, Contra 4, and Bloodrayne: Betrayal. The original Shantae was released in 2002 for the Gameboy Color, which was faded to obscurity despite highly critical aclaim since it was overshadowed by the Playsation 2, original Xbox, Gamecube, and the Gameboy Color's successor, the Gameboy Advance.

After being cancelled from the Gameboy Advance, Shantae: Risky's Revenge debut on the Nintendo DSi shop in 2010, which many people agree is the best game on the DSi shop and best looking 2D game on the system. It was later ported to iOS in 2011, and is getting a re-release on Steam next year on Steam.

And now, Shantae: Half-Genie Hero has been funded by the wonderful fans who helped support their Kickstarter campaign, helping it reach $776,000, which was more than enough for the game's production and it's port to 7 platforms; Playstation 3 and 4, Xbox 360 and Xbox One, Wii U, Playstation Vita, and, of course, Steam! (The 3DS will be getting Shantae and the Pirate's Curse as an exlcusive) I cannot stress how beautiful the game looks in HD, as Mariel Cartwright is behind the animation, who was also the animator of Skullgirls.

If you do pledge to them, you won't only be helping yourself, but you'll also help the game reach the best it can possibly be. As of the time when I'm writing this, the game has $843,682 donated to it thanks to the backers and those who have lingered or added onto their pledge to help after the campaign. The game can earn many things like new chapters, a hero mode, voice acting, or fully animated TV quality cutscenes. You can get many things out on it depending on how much you donate. Here's a quick rundown of Paypal bundles they have :

(Paypal and Visa, Mastercard, Discover, and American Express are availible methods of payment.)

If you pledge and could tell me, that would make me feel like I've accomplished the reason why I started this in the first place. :D

The competition will be a Team Fortress 2 4-on-4 match of Attack/Defend (may change according to feedback) with weapon white lists to prevent unfair advantages to those who are barely joining for the sake of this. So, if you're new to Team Fortress 2, you shouldn't need to worry about being overpowered by a better weapon. The weapons that are allowed as well as other various rules will be heavily based off the ETF2L 6v6 Season 17 League (Weapon restrictions-http://wiki.teamfortress.com/wiki/Competitive_item_restrictions). These are not final however, as I am still analyzing the weapons. Some will be added, and maybe some will be removed. These decisions will be made final when I will be no longer be accepting submissions for the competition.

Once submissions close, the discussion will include a link to the brackets, final rules, and anything else if needed at the bottom of the post. I want this to be easy for you guys, so I'll be sure to keep you guys updated on it as often as possible with plenty of lead time before it actually starts.

How I plan for it to work out (Dates, Brackets, Prizes, etc.)

There are two keys of each game that are available, so the top two people of each bracket will receive the game they submitted for. (I'll get to brackets and how they'll play in a second.) The games you can enter for are:

1) A.R.E.S: Extinction Agenda- Complete Edition: A platformer shooter in the spirit of shooters like Mega Man. (Includes the base game, Berzerker Suit DLC, and the original soundtrack)

2) Payday- A co-op shooter where you pull off many different heists in banks, warehouses, or mansions either in silence, guns a-blazing, or even both.

3) Skullgirls- A competitive 2D fighting game with a diverse cast of balanced characters. The roster's small, but each one is amazing in their own way.

4) Dust: An Elysian Tail- A platformer hack n' slash/beat 'em up with beautiful visuals and enjoyable combat with one of my favorite sidekicks in any video game.

5) Of course, Shantae: Half-Genie Hero- The whole reason why I started this. The critically acclaimed platformer that we all enjoy starring the belly-dancing, transforming, half-genie, Shantae. (Includes wallpaper)

(Please note that all of these are Steam keys with the exception of Shantae: Half-Genie Hero. Since it is still in production, the winners will keep in close touch with me so I can choose the platform they want it for and give them the code when it finally releases.)

As of now, submissions will end on Martin Luther Kings' Day, the 20th of January (Monday), and for the actual competition to start itself on the 25th, 26th of January (Weekend Days), and the 1st of February (Saturday).

-How it carries out-

On the 25th and 26th of January, all the matches will be played until there each bracket is in it's final round, where you will then have one more week to train with your teammate until the final match. The reason why I say "teammate" is that the final round will be a 2v2 match, since there are 2 keys of each game, so the winning team will get the key.

The brackets need to carry exactly 8, 16, 32, etc. people for it to work out perfectly. I'll be watching how many people are joining each respective bracket so I can limit how many people are in each one so I won't be at the point where the bracket is too many slots away from an increment where I have to come up with a solution.

As I said, for now it will be a best-of-3 of the Attack/Defend game mode.

Each match will start 2 minutes after the specified time unless everyone is already there in case people load in late or there is another problem. If a person is missing from any team after those 2 minutes, a moderator will claim your position in the competition and you are disqualified. Remember, brackets and schedule are posted 6 days before it actually starts. If there is any problem regarding the date or time, talk to me before two days pass after they are posted so we can fix it.

A few rules during the match:

All classes are allowed.

You will be able to change your class at any time you want.

You can change your load out whenever you feel like.

Spawn killing isn't tolerated. There needs to be a reasonable amount of space for a team to exit and be ready for explosives, snipers, turrets, etc.

For the 4v4 matches, there is a 3-second wait before you spawn. The final rounds will have an instant spawn.

(Any additional rules will be added when they come up.)

3) (Optional, but MUCH wanted!) Let people know! The more people there are, the more successful this competition will be and the more I can do in the future!

4) (Optional) GET FRIENDS! Since it's a 4v4, you can have up to three friends to be on your team. It's not required, but if you want to, then make sure you message me their names so I can talk to them and that they comment on the post as well. (When you post, if you have a team, make sure you comment the game and in parenthesis type in your team name.)

Thanks for bearing through this wall of text, and I hope this helped a lot of you, and if you have any questions, just ask away and I'll be more than sure to reply to as much as humanly possible. I wish the best of luck to you all. Have a good one.

Please be reminded, this is NOT a scam at all! I have four of the five games I am giving away, so I would have NO use for them. (Look at my inventory. All the games there will stay until they are distributed to the winners of the competition.) Prizes will be distributed once all of the brackets are over. If you would want me to gift the game to another person with any specific message, just stay after the competition.

Originally posted by RH' NBlast:
I don't fully understand this... How this tournamnet should look? Should I find a team or what?

You should find a team, yes. You don't HAVE to, but I'll put you guys on the spot on the brackets so you can play alongside eachother.
#6

mudtruck
View Profile View Posts
Jan 9, 2014 @ 8:21pm
I'm in will bring 3 other people with me, but would love more info such as how long the tournement will be "general time" and what time. Shantae
#11

Originally posted by Streak210:
I'd love to play this, Even without a team. This should be fun!

Just comment the game that you want to win. ;D
#13

2
What should be Shantae's moveset for Smash Bros Switch?