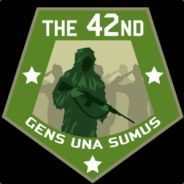 My name is Sacriel, a lifelong gamer and sniper fanatic. My channel is one of the most well-known and respected communities on Twitch, known as the 42nd. Drop by and watch my interactive and educational stream - if you like what you see then hit follow and become part of the community!

The 42nd is a community, not a clan. There are no applications or initiations to being in the 42nd - just by being an active viewer you are a part of the 42nd! We believe in respect, positivity, and integrity. We love interacting and sharing our gaming experiences - imparting our own knowledge as well as learning from our viewers!

For those who may have missed the word of Sacriel, he tells us on his stream whomever posts a funny quote of Sacriel written in Old English or Biblical English that he shall pick at random, one winner. Whomever ends up being the Chosen Winner shall be contacted and mailed one if three items if their choice. A Roccat keyboard, Roccat headset, or Roccat mouse. This is the word of Sacriel as of December 6th, 2012. Amy further information I gain I will update.