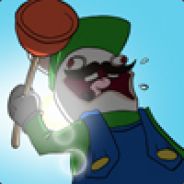 I get a lot of friend requests a day and it's a little ridiculous now. So instead, I've created a group here for you fine ladies and gentlemen to join. I can still keep you updated on various items of business and I hope to play some Team Fortress 2 with a ton of you at some point. Like full-server scale.

Spread it around and help it grow!

Hope you all had a good Christmas and New Year. Sometime over that month or so I managed to finally move house, giving me my own shed/office thing that will allow me a ton more space to make videos. Only just got electricity and lighting in here but I'll gloss over that for now.

I'm writing to you today with slightly downbeat news. Moving house has taken me further out in the middle of nowhere, which might be good for having very little background noise, but it also has a detrimental effect on my internet. Upload and download speeds are fine but because we're using satellite internet (only way to get decent enough speeds), the ping times are eye-watering.

This means that I won't be able to play TF2 for at least a year, either because that's when the fibre optics are supposed to be brought out to where I live or because that's when I aim to move out of my parent's house. This group shall still function as normal and I'll look to get my server (which is on someone else's internet thankfully) up and running again.

I've been working for a little while now to try and get my own TF2 server and I'm pleased to now say that I've finally got one set up for you people.

Many thanks to Ninfyr for doing most/all of the leg-work.

Not much more to say about this...other than have fun!

Merlina Dovich Apr 16, 2020 @ 12:21am
Came to pray to the church of RabbidLuigi in these grand ol' times. Good luck out there everyone.

I don't know how I would.