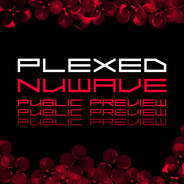 For users of the Plexed Steam skin!

The home of the Plexed Steam skin! The downloads page is here: http://steam.gamebanana.com/guis/30097
Updates will be posted in this group!
Feel free to forward any media coverage or suggestions!

What's this? Andy meeting a deadline he mentioned in a blog post? Is it 2015 right now?

Alright, let's get down to the cool stuff as fast as possible: https://i.imgur.com/FRa0ojU.png

As mentioned in last night's progress report it is now possible for me to skin the library, friends list, and every single part of the Steam website when viewed within the client. You'll notice changes made to the library and a dark background across the Steam site immediately, though there are currently no friends/chat changes in the skin. My work with CSS injection is very early on and my roadmap towards an initial release is only going to include changes to the library, friends, and chat. These are going to be really basic initially, similar to how the changes made to the library are right now but much much cleaner. The dark background across the site is going to be removed for a release just for the sake of consistency until I can get the whole thing done. (Even if I do find this much easier on the eyes!)

I have a lot of ideas going through my head right now but this has more than tripled the scope of the project. I'm excited but trying my hardest to focus on one thing at a time - it isn't easy.

The default accent color for this preview is a cool blue. Should you want to change it, the process is similar to preview 1, but with a few extra steps and options. You'll want to go within the skin's folder and go to \resource\styles\steam.styles and open that in your text editor of choice. (This works with something as basic as notepad). You can either replace the Accent and AccentTR values with colors of your choice, or follow the instructions in the file to use some of the presets I've defined.
[Note: Preview 1's accent color is here as crimsonaccent & crimsonaccentTR]
[Note 2: The PlexedClassic preset you see in there isn't done yet, I'm thinking of doing something a little more for that one.]

After picking your color, you'll want to make note of the first three numbers defined in it - those are RGB values. Copy those and move over to \resource\webkit.css - this can also be opened in something as easy as Notepad. Look for the --Accent definition on line 4, and replace the RGB value with the RGB value from your accent color. Save both files and relaunch Steam with Preview 2 as your selected skin.

I apologize for the extra steps this time around, I set up the accent preset system literal minutes before experimenting with library skinning and until I have a customization app together this is the best way to go about things.

Whew, that was a bit longer than I thought it would be.
Other changes off the top of my head:
- Music player (but not library, yet) is resdesigned
- Top-right controls have been changed around and I added in the announcement button Steam brought in years ago. I suppose I should have added that a while ago.
- Hidden library section is available in the main dropdown menu
- The entire grouper has been cleaned up. Not feeling the fatter downloads bar though so that will probably change.
- Loading symbols should be different throughout the skin.

Anyways, here's the download. I think I'll take a day or two off from work on this to stop myself from going insane, but PLEASE get in touch with feedback! If necessary you can always contact me on Twitter @BennettBlogs or reach me on Discord at Andrew B.#3794.

There are a few questions going through your mind right now.

Okay, maybe just one question. Allow me to answer.

Library skinning is back. Many thanks to the members of the Metro community who found out this was possible in the first place.

I'm going to end up saving most (if not all!) CSS injections for a v2 as previously mentioned because a proper complete release takes a very very VERY long time to put together. On top of that, I still have to finish up work on Steam's VGUI elements.

Those are coming along very well and will be my focus until vNext releases.

Even the about screen is accent based now - https://i.imgur.com/AOHZd0O.png

Internally steam.styles has been a little restructured to make changing colors very easy for people who are new to the system. This will have to do until we have a customization app - https://i.imgur.com/4ZYDdsI.png

I'd take more screenshots but it is incredibly likely that preview 2 will be out tomorrow with CSS mods alongside it just so you can get an idea of how drastic this can be, I'll probably be a bit better at blogging by then. I've been doing cleanup for... close to the entire day. I've fixed so many bugs since preview 1, this has to be the most Plexed development has moved in years. I cleaned up wizard windows finally, that was a rough one to fix.

I'm... going to take a break. See you tomorrow, hopefully.

Andreas³ Aug 26 @ 11:19am
The old Vista-like theme was gawjes, but it'd probs look a bit out of place on today's flat and boring UIs.

Though I sorta do miss that look, too :D

Ridley12, Knight of God Aug 15 @ 2:41pm
I'm currently using Plexed 5, and the only issue I'm experiencing is in the Settings window. A few of of the sections have some of their options cramped up towards the top of the window on top of each other (not all of the options in a few of the sections, just a few of the section's options.)

Also, this isn't an issue, but I miss the big Vista-like back and forward buttons that 4.7 had.

Tomoko Oct 10, 2019 @ 12:49pm
Plexed seems to have an issue with the Report function UI on profiles not letting you scroll down far enough. I'm currently using 4.7 and I'm not sure if the issue is present in 5.0 or not. I'll wait for the version 5 update and the steam library update to pass before commenting further.

Saberviper Sep 25, 2019 @ 8:11pm
Nice that you keep the Skin updated so it works with the newest version of Steam. Keep up the good work Andy!

Jun 12, 2019 @ 7:28am
Haven't heard of that but I have recently been told that the leaked build with the new Steam redesign allows you to skin the client through CSS. Should that feature exist in the final release... well, Plexed won't be going away any time soon.
< >
VIEW ALL (378)
GROUP MEMBERS