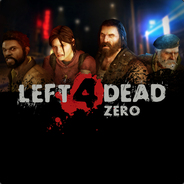 THIS PROJECT HAS BEEN RETIRED.

Left 4 Dead Zero was a project dedicated to restoring the version of Left 4 Dead that Turtle Rock Studios had planned on releasing to the masses.

Didn't think I'd need to make this, but I'll make it real quick.

Just because I released all of the assets to the public doesn't mean I want someone to continue the project after death. Learn from our mistakes, it's not worth your time. I also don't wish to see people re-uploading the work as their own or just re-uploading the work so people can download it outside of the Mega. I still don't authorize it or support it and I will still file take downs. There's nothing wrong in making personal installs and edits of the project, but reviving the project for attention sake or just credit thieving is still a garbage thing to do.

The assets are not guaranteed to work, and a lot of the work has major known issues. I will eventually get around to releasing the working content (or at least the stuff that mostly works) onto Workshop and GameMaps.

doob Sep 29, 2018 @ 8:57am
im not im just saying when this comes out im going to play it instantly because i've wanted this forever and i finally found it