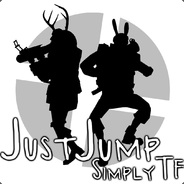 The group page serves as a place for important updates, the discord is much more active, and includes update logs and more active conversation regarding improvements.

Website
Has ranking and other information available, it is still a work in progress. If you have suggestions for what you would like to see on the website.

Description
We are a large group of dedicated TF2 players who enjoy the delicate and beautiful art of rocket jumping. We set up this server to provide a healthy enviroment to both enjoy and improve rocket jumping without the need for screaming statistics at you!

We started up as a replacement of the large hole that was left with AusJump's sudden departure in the last quarter of 2014, but have since grown into a very large and strong community of regular jumpers since.

We've also run a custom hightower server since 2012 for those looking for a tdm experience.

Jpk has a pretty decent understanding of SourcePawn which is the programming language the server uses, plugins are constantly being developed and maintained to provide the best experience!

Teachers
We have quite a few regular players who enjoy jumping and don't mind teaching new players the basics.

A whole 3 and a bit months later, I know, crazy right?
I've finished UNI, and ready to waste time by making and fixing a few of my plugins!

We're still setting up, so their may be some patchy bits, if you notice anything missing let me know and I'll add it to my growing list of things to fix.

We have plenty of RAM, so I may look to open aditional servers if people have suggestions, let me know!

I'll be fixing things up as I go, but invite some friends, tell that rando from subway that SimplyTF is back and that he should join.

GoodBye
Today at 11:04am SimplyTF shut down its TeamFortress 2 servers, and while it is a shame that it had to come to an end, it was a true pleasure to spend the time that I have with the community and TeamFortress 2. There aren't many games that I can say I would play for over 1000 hours, let alone 4 times that number and still be happy to play another game.

We opened our doors in 2012 not long after a Star_ made a video on HighTower, and I reeeally wanted to play HT, and that was the day I discovered that AU didn't have any HT servers, and that is the origin story of SimplyTF. Our initial Player limit was 11 (Which lagged), and we reached that daily until we expanded into proper servers.

Thanks for sticking with us through some pretty ew years, where my free time was limited and unable to fix some problems, but I like to think many of the years we were operating we were having more fun than not. We may come back, depending on how TF2 goes down the line, but for the time being, Valve appears to have no interest in maintaining TF2 and the Player count is slowly drying up. So, until those updates come back, there is a good chance TF2 won't be on the SimplyTF roster for servers.

SimplyHub
SimplyTF won't die here, we will act as a ‘GameHub’ of sorts, in the coming days I'll reorganize the channels and just clean it up a bit. We'll act as more a place for people to start servers or group up with people. I don't plan on doing Everyone mentions often, so we should remain fairly quiet for those of you who just want to stick around.

Final Thanks
Thanks again, for being such an awesome group of people, over the 7 years of operation, we have received 114 2 key donations, and 155 3 key (Minimum) donations, which is insane (269 Unique Donations, at least 693 Keys). Over the lifetime of the server I've probably lost some money on the cost of operation (If you could even directly translate keys to money), but the community was by far the biggest return on the servers. I've met and become friends with a lot of you over the years, some well into your 20s and many that aren't around anymore.

I wish you all the best in the future, and I hope that 5+ years down the line when someone is like "Wtf, why do you have 2,000 hours of Team Fortress 2 gameplay" you remember us as more than just a huge waste of your time. :love:

Take it easy, and stay awesome @everyone, it's been an honour.
SimplyJpk.

If we come back, our Discord will likely be first place to find out.
https://discord.gg/2rUP9QM