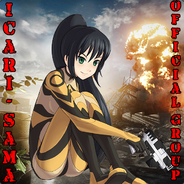 Why? 'Cause Icari-sama is the best Waifu 4 ever. Not b-because we like her!


This Group is for every brave Merc who want to show his loyalty to our great Icari-sama.

Today I had the pleasure to play the very fist beta version of the new Sunrider, SR4.

For these brave warriors, who cannot fight this new upcoming war now, I will write here full after-battle-report, so that you all can prepare for the war LiS will send us in.

During my lack of time and lot of other projects I have, I will sadly not write this all with the Élan I normally have. So I keep myself as short as possible.

Graphics/Art:
It looks asbolutly great. Everything comes in high-end sharpness and beautiful, strong colouring. It really looks like a state-of-art VN, which can defeat every other big VN currently on the market.
Lot of things (e.g. new uniforms, mechas) looks kind of over-ornated (compared with SR:FA/MoA & SR:LD), but I think this is something you get used to very fast.
And, sadly, the most important point for myself, is a negative one: Our great godess, Icari-sama, even when armed like it has to be, got (on the title screen) such a strange facial expression, that I felt instantly sick. In my own opinion, her expression looks like... idk, a person which has horrible constipation. This is NOT how our beloved Icari-sama should look at! This is unforgivable!

Gameplay:
The point'n'click system is very innovative for a VN and great to discover the lore. I personally hope we will get it many times (please just spare me with p'n'c puzzles).
The new battle system is very tactical (movement!) and cool, the battles looks great. LiS did everything right here!
I missed tooltips from time to time since I just clicked away the tutorial xD. This could be maybe improved.

The R&D part is very cool, you can skill your mechas/ships in extreme lot of different ways which really feels RPG-like - which is great! I really like the minimalistic art style of the R&D part, it feels really like doing research stuff, but I guess some ppl could find it a little boring. I personally be in love with everything that looks a little bit like a excel-sheet :)

The VN part so far... complete lack of any important dialoge option. Which is sad. extremly sad. But I guess - and hope - no, demand - that we will get more choosable dialogs in the future.

Characters/Story (no spoiler):
As far, everything is open, but it sounds very cool. If LiS don't mess it up with forced romance and railroading, SR4 can get absolute amazing!
Of course the absence of any real dialoge option (just "say X first for some more lore") is very frustrating, but as written before, I hope this is just due v.0.011.
I myself enjoyed really Lynn, which got a much more fleshed out character then the boring "I'm evil, muahaha, and thats all" from past SRs. She is like 10 thousend times more likeable as Chigara (for me! Guess lot of ppl will think otherwise) and really got some Waifu-potention (for these who not be glourious enought for Icari-sama!).
Still - as seen with Lynn - LiS is capaple to change the character of a girl from previous parts. Even when it is great with Lynn, I still hope they will not change any other girl of the cast too much, since they where mostly all great as they where. I would not swear it, but somehow I felt like Asaga got much more like Starnovas Nattan, compared to the previous SRs.

So, that was it from my side.

SR4 has the potential to become the greatest SR so far - and one of the most modern, most beautiful VN currently available! But I still watch LiS with distrust after the "Liberation Day Massacre"...
We need more dialog options for sure, and they should not fuck up Icari-sama! But if they make them/don't fuck her up, SR4 will be just awesome!

Finally, we’ve won this battle! But the war is not over yet.

On the 15/11 last year, we declared our group as renegade, since LiS wrote, they will not make a new Sunrider short- and mid-term.
In place of grim dark mecha battles, we should play girly idol games, and a weird project, called wonderland, which surely will not provide hard battles to gain glory and honour for our goddess.

In the last days, LiS changed their plans again. Through our heroic resistance, our iron will and the glory of our unstoppable goddess Icari-sama; through her grace and beauty, we forced LiS with all might to revoke their un-tsunish plans and start creating a new Sunrider instead.

Thank you comrades, for the moths of battle, for suffer, you’ve endured. As renegades, without any foreign support, you’ve fought for the TSUN. The battle looked hopeless, but you stood strong and fought for Icari-sama in a glorious, heroic last stand.

Now, Victory is ours!

Considering these Events, I officially declare this Group no longer renegade!
Instead, we have to push back the enemy with everything we have. We have to show LiS, that we, the followers of TSUN, the sons of Icari-sama, are the greatest, hardest and most heroic fans. We have to show, that our goddess Icari-sama, should get more screen time, a own route and Fan merchandise!
We must show our force!

Invite all your friends to this group. We need more men.
Join the new ICARIOG-Discord[discord.gg].
We will fight, we will fight harder than ever before. We won the battle, we will get a new Sunrider, but now we have to fight, to get not chigara-forced-liberation-day, but that one true TSUN game we need!
On our Discord, we can plan further steps. Raid the official LiS Discord. Recruit new Followers of TSUN. Make propaganda Art to spread it in the forum. Start new Waifu-Wars. Team up and fight together!

Brothers, the time is come to charge!

For the glory of TSUN! For Icari-sama! Death to all false Waifus!
Follow me into the heart of battle, into glorious, heroic death. Our souls will be forever in the imperial TSUN army of immortals; we will guard Icari-sama as their finest! Our blood will be HERs.

Gamerjunkie Apr 4, 2016 @ 11:45pm
No, we're not democratic! Icari-sama is the Tsun-god-empress! We fight in her name and kill the heretics that worship the trash known as Ava!
< >
VIEW ALL (25)
GROUP MEMBERS