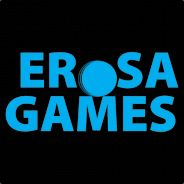 This is the official group for Erosa Games, where we will be publishing about our games, campaigns and giveaways.

Our game Soccertron got Greenlit on Nov 18th and to celebrate it, we'll be hosting regular group-only giveaways!

Feel free to write and ask as many questions as you like, we are eager to talk to you!

IndieCade East will take place this April 29 - May 1, 2016 at the Museum of the Moving Image in New York City and Soccertron is one of the showcased games!

As a celebration for this event, I'm running a 60% discount for the following days.

I hope you enjoy the player's new graphics, although I have to admit that I'll miss the old ones a bit :)

By the way, the new trailer music is by my friend Sergeeo[sergeeo.gameaudio.es]
Read More
view all < >
112 Comments

HadesRuin Mar 27, 2018 @ 9:24pm
Some reason I don't get games anymore is there a reason I was removed are !! I wrote reviews on the games so I was just checking !! Thanks for the game I did get