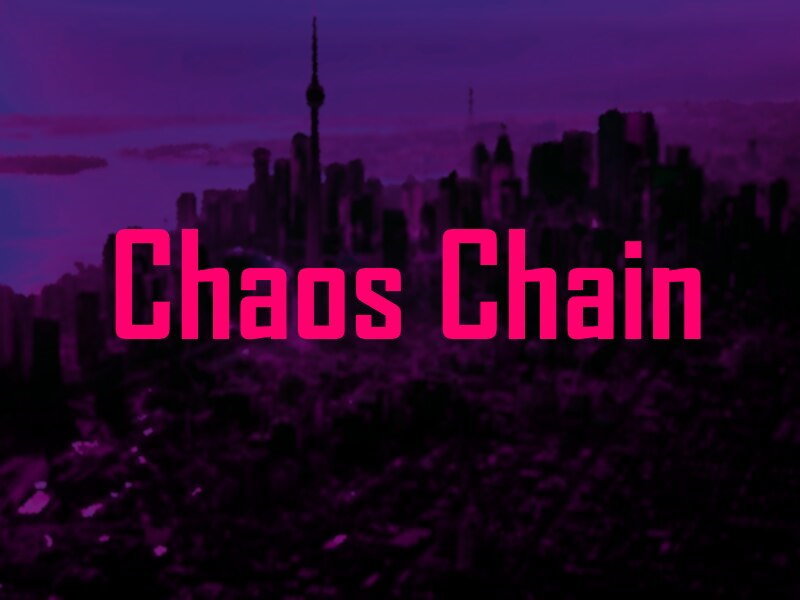 Hey guys, it's been a heck of a past few months trying to get this ready for the first public alpha, but holy cow we're here!

The game store page can be found below! Please keep in mind that this is the first public release and it's still a work in progress, so there will be missing or incomplete content and features, but if you're interested, check it out!

In addition to the base game, if you'd like to help me out by contributing more to the game's development, I've set up two DLC support packs that will help me keep the bills paid, feed my dog, and allow me to focus more on worrying about making the game itself better than marketing. As a thank you for the extra help, you'll get some extra in game content to mess around with! Check those out below if you're willing help even more!

Thank you all for your support and anticipated feedback!

This is just a heads up that Chaos Chain will be releasing later today!

I have a few last things to touch up and get ready, but it should only be a few hours and I'll release the game! I'm really excited to start getting feedback to hear what you think of the game so far!

It's been a long road and especially lately, a whole lot of work and sleepless nights with little to no breaks but I think it'll be worth it. What I have so far is pretty solid and I've incorporated a lot of new features and quality of life improvements to this compared to my earlier games based on previous feedback and requests.

I'll have more information in a few hours!

I just wanted to let you all know that Corrosive Studios is participating in the Steam Lunar New Year Event Sale!

Check some of them out below!

It's been a bit since I've posted a status update for the game, but development has continued as normal.

I'm planning on releasing the game in Early Access this coming week towards the end of the week (Thursday or Friday if all goes according to plan) and I'm excited to hear what everyone thinks.

I've been working a lot on polishing the game as it is right now, bug testing/fixing, and adding more playable content. I have a handful of side quests, lots of equipment and gear, a custom gambling minigame, lots of lore, highly detailed environments, and the beginning to the main story all just about ready to go, but I need a few more days to finalize everything for the first release. I wanted to answer some potential questions for people below so they can learn more about what the game has to offer.

Q&A
Some things to be aware of for the game's initial release:
1 - The game is NOT all about combat. Roleplaying, dialogues, branching situations/events, and different outcomes are just as important, if not more so. Combat in the game is DIFFICULT but FAIR.
2 - The game doesn't have a ton of playable content yet. It is just the beginning of the main story and a handful of side quests and some areas to explore. Everything does work very well right now though and it is a pretty polished experience. I will be adding a TON more content throughout development however, just as I have with my previous projects.
3 - The game will be priced at $7.99 (or your local equivalent) initially with two optional DLC supporter packs ($2.99/$5.99) if you'd like to help me out and support the game's development further. The final price of the game is still to be determined depending on how much I add and how far it goes, but buying in Early Access will get you a discount either way.
4 - I plan to take suggestions and feedback from the community all throughout development like with my previous games. If you have something you'd like to contribute, feel free to post on the forums.
5 - The game does have some mature content/topics so please be aware of that. There is no nudity or racism, but there is harsh language, implied drug use, gambling, references to prostitution and gang/criminal activities, and so on. It is pretty general mature content.
6 - Development will likely go on for about a year depending on how things go. I will be releasing content pretty quickly (especially now that the foundation is done) and plan to release large updates monthly and patches weekly.
7 - The game does have achievements and will hopefully get trading cards, but that is up to the community to help me out with. Trading cards on Steam are locked behind a sales quota (that we don't have any direct answer to as to what the quota is) so it's not guaranteed unless community interest is high enough.
8 - Yes, there is a cyberware/cyboring upgrade system already in place, but it is currently unavailable until I do more testing and do more work on it. Right now, I'm focusing on adding actual gameplay content.
9 - The game world is going to be the entirety of Slade City, a fictional metropolis set in the United States approximately 50 years in the future. Right now, there are two districts to explore, but there will likely be at least 10 (plus all the interior areas inside them) as well as extra areas for missions and so on.
10 - Just ask if there is anything else you'd like to know.

Wanted to stop by and show off a new feature I got working this morning - battle callouts!

Over time while in combat, enemies can now shout different things at you!

Check out some screenshots below! 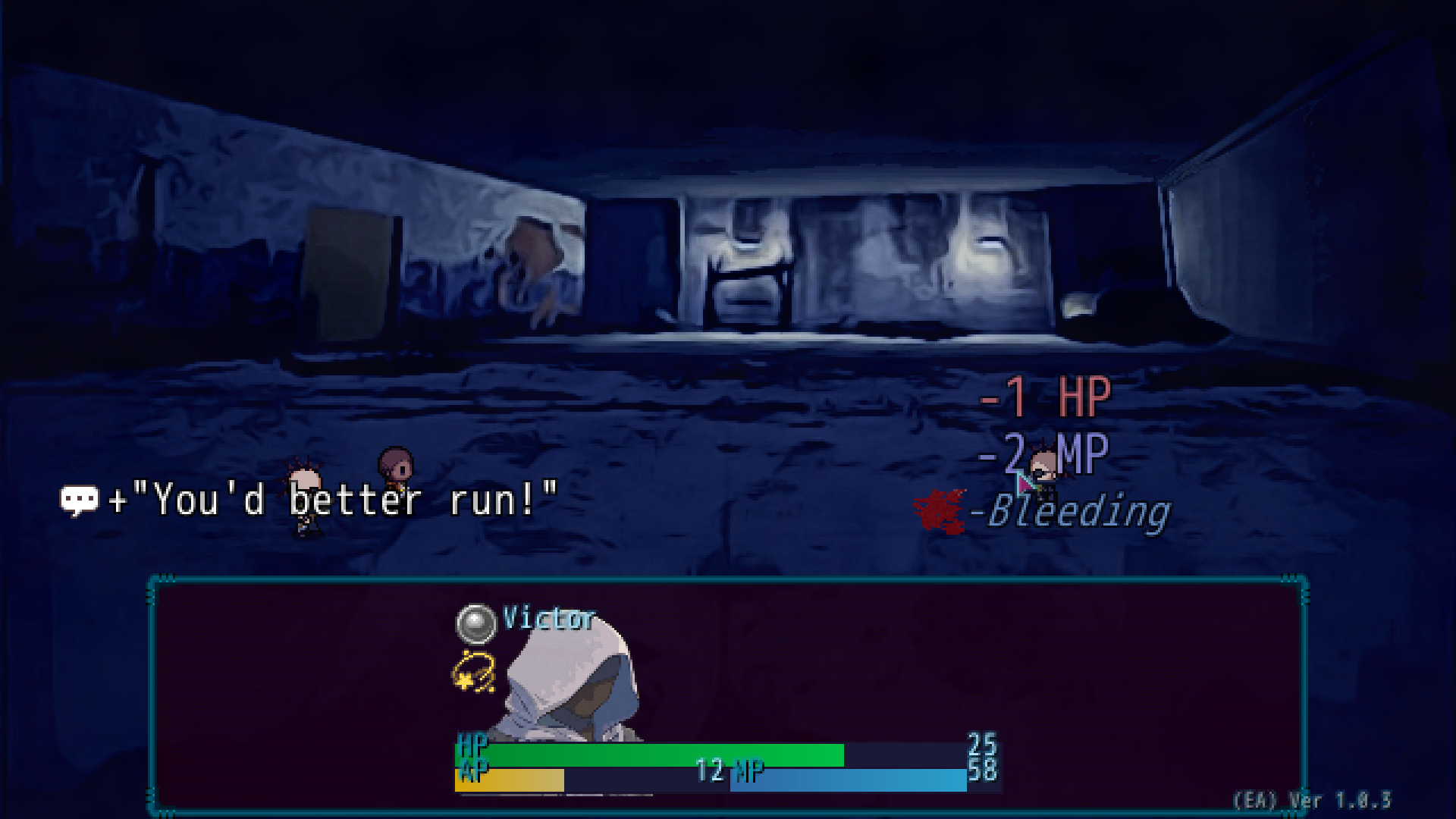 (He's absolutely right, I'm getting destroyed in this fight) 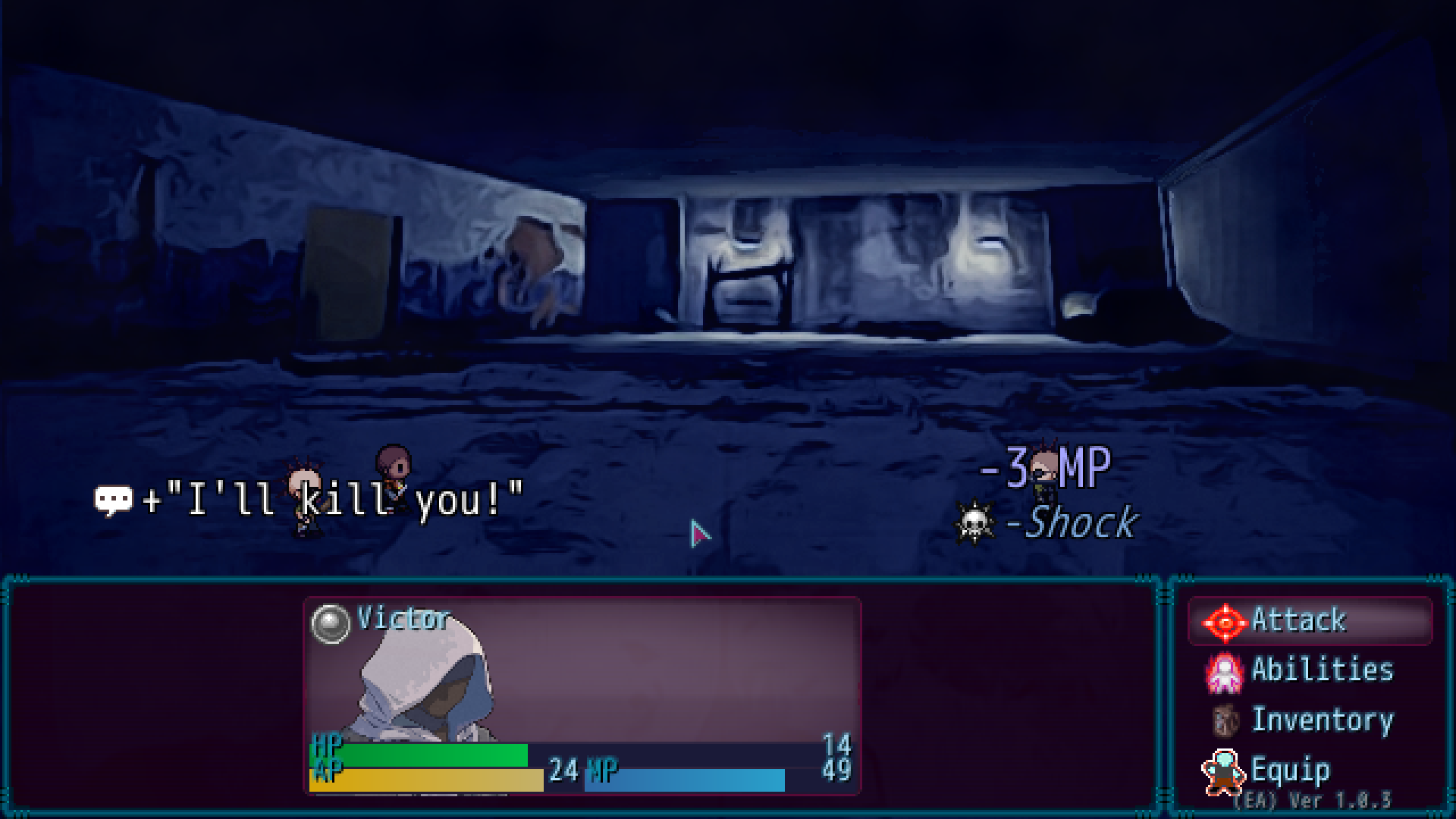 And here's one just showing the battle scene as it is right now. A lot of work will still need to be done to make them look better, but here is what I have. 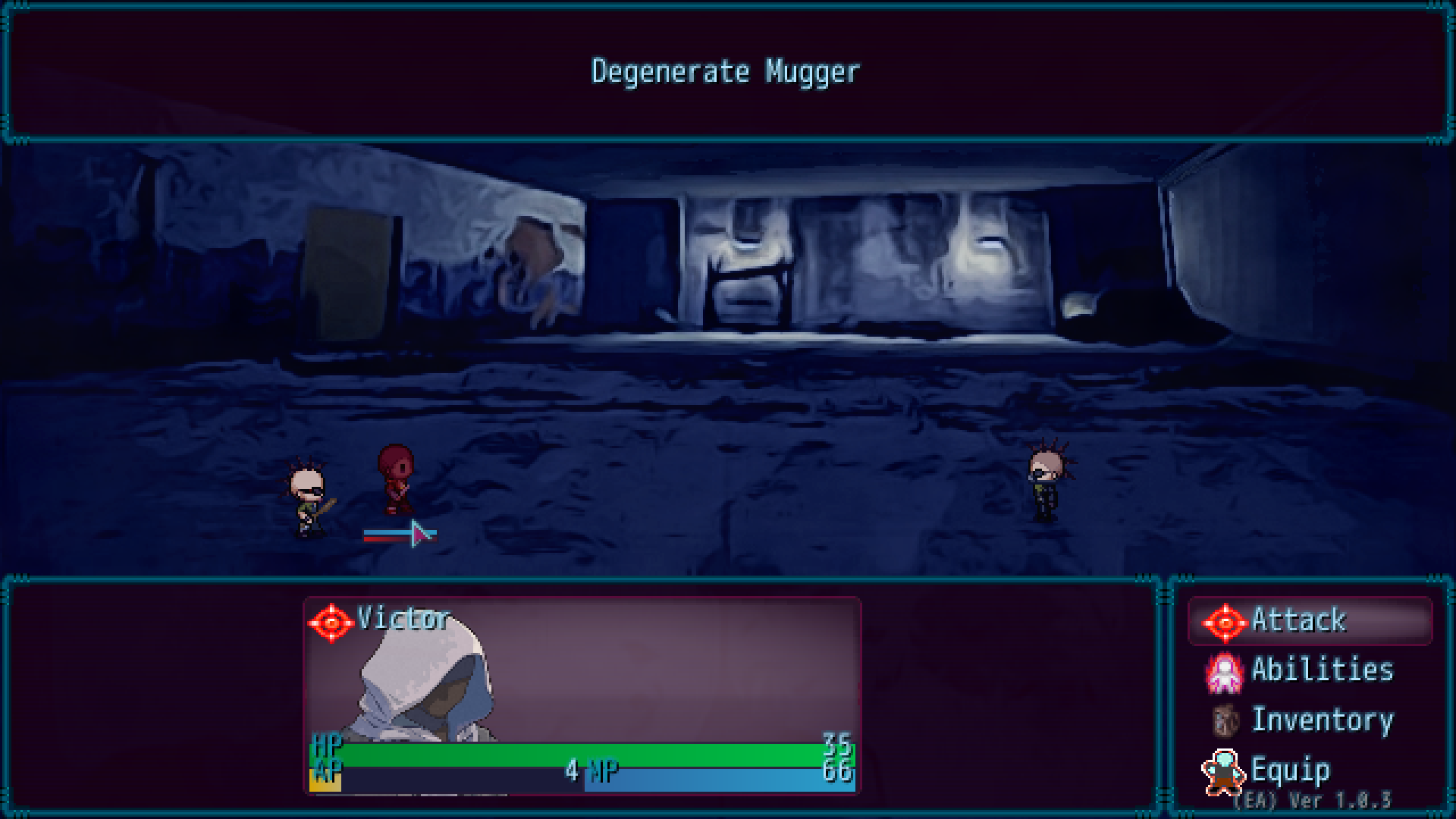