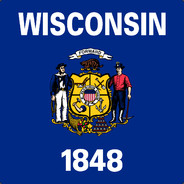 We are a Union regiment for the North and South Mod for Mount and blade: Warband. We are a NA regiment with a primary focus on the NA community though. Our leader is Fenton2000, Their steam can be found here:[2ndWI]Fenton2000. We are a mainly infantry regiment but we may go specialty classes if its requested.

If you are interested in joining the 2nd Wisconsin, Message any of the group moderators/officers to get fully set up.

To download the mod, go to the moddb link below.
https://www.moddb.com/mods/north-south-first-manassas

Your tags in game will look like the following: CSA_2ndWI_Rank_Name
Make your banner the Wisconsin State Flag.

The teamspeak we use is the CSA TS, it's IP is here:
ts3.csa.wtf

The Governor of Wisconsin, Alexander W. Randall (R), issued a call to arms throughout the state of Wisconsin following President Abraham Lincoln's April 15, 1861, proclamation for troops to put down the rebellion. Enough Wisconsin men enrolled to allow the formation of two regiments, one more than the single regiment quota from Lincoln's directive. The 2nd Wisconsin was primarily raised in Madison, Racine, Milwaukee, Oshkosh, and La Crosse.

The regiment suffered severe casualties during the 1862 Northern Virginia Campaign, fighting against Stonewall Jackson's Confederates at the Battle of Groveton, and seeing more action at the Second Battle of Bull Run. During the subsequent Maryland Campaign, the 2nd Wisconsin attacked Turner's Gap during the Battle of South Mountain, and then again took high casualties in the Cornfield at Antietam.

Perhaps the regiment's finest hour came at Gettysburg, where it lost 77% of its strength (233 casualties out of 302 effectives) in stubborn fighting on McPherson's Ridge during the Iron Brigade's lengthy action on July 1, 1863. Colonel Fairchild lost an arm due to severe wound, and most of the line officers went down as well. The regiment reformed on Culp's Hill and entrenched for the rest of the battle. It later served in the Bristoe and Mine Run Campaigns.

Although the 2nd Wisconsin was able to replenish some of its losses, it was never the same fighting force again. The regiment was mustered out on July 2, 1864. New recruits and later enlistees were consolidated into a battalion which was amalgamated with the 6th Wisconsin Volunteer Infantry Regiment on November 30, 1864.