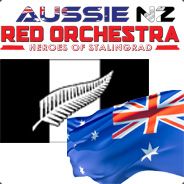 Aussie / NZ is the destination for serious Red Orchestra players.

The best players flock to Aussie / NZ servers not only for a first class gaming experience with the best RO game configurations but also because it is delivered using premium low-lag tech and is managed by an enthusiastic and proactive group of administrators.

The server hardware is really good and it is patched with the latest modification and enhancements available for the RO franchise.

Players look for an available Aussie / NZ server before anything else.

Subscribe to the Aussie / NZ Map Collection in the Steam WorkShop to keep updated with the latest maps run on the Aussie / NZ servers.
http://steamcommunity.com/sharedfiles/filedetails/?id=175869318

Tommy, aged 58, was diagnosed with the terminal illness last July with the hideous disease sending him to hospital on Christmas day.

He didn’t leave hospital and spent his final hours with wife Gabby by his side.

A memorial service will be held for Tommy at Fort Scratchley in Newcastle next Thursday evening.

A colourful character known for his regular vocal encouragement of players in game, Scarlett was a polarising to many in the community but those that took the time to know the guy, quickly saw the different side to the man.

Well-read and with a knowledge of WW2 beyond the avid enthusiast, Scarlett could talk for hours about his passions. He was always up for a chat, and we spent many an hour talking about the machines of war or chatting through whatever he was up to in life at the time.

I also got to know Scarlett in the real world when he helped my business for a brief period around 2013. He would travel down to Sydney from Newcastle for a few days of work, staying at my place -always falling asleep in front of the TV. He and Gabby were also guests at our place in Sydney.

Business pressures, Covid-19 and less gaming in general did see me lose touch with Tommy recently. Something I regret.

Capt Scarlett, I hope you made it into the cap zone mate.

Matt Baxter
Cat in the Hat.

Gabby has asked if anyone has videos or content involving Tommy to post below. There were a bunch of troll vids from 2016 which Tom thought were classic. I will try to find them and post below.

If you have a spare five minutes, can you help me out by doing this survey on gaming content consumption habits. It is super quick to do and will help me out a bunch.

Slank Jan 18 @ 2:44am
rip capt scarlett, i will never forget trying to drive a tank with u screaming at me because i was dogshit. (and schooling me on who had the best tanks in ww2) my condolences to his friends and family