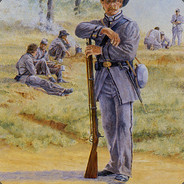 STEAM GROUP
4th TX Co. B "The Tom Green Ri [4thTX.B]
2
MEMBERS
0
IN-GAME
0
ONLINE
Founded
May 2, 2018
Language
English
Overview Discussions Events Members Comments
ABOUT 4th TX Co. B "The Tom Green Ri
Tom Green Rifles history:
The company known as the Tom Green Rifles was organized at Austin, Tex., early in the spring of 1861. It was named in honor of Col. Tom Green, who lived in Austin at the time and a veteran of the Texas and Mexican Wars. The Tom Green Rifles was one of the first companies organized in the State. It was composed of merchants, lawyers, clerks, mechanics, and farmers. They first went into camp of instruction on the San Marcos River, in Hays County, and later on at Harrisburg, near Houston.
VIEW ALL
POPULAR DISCUSSIONS
VIEW ALL (2)
GROUP MEMBERS