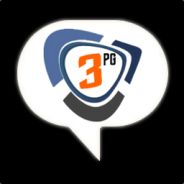 Six years and still going. Keep on Keepin on!

Also, if you wish to recieve notification of our more common events, please join our subgroup 3PG Events. Link is below.

I just heard from Kelivan that Kevlar passed away about a year ago. Rest in peace to the father of this community. Details are sparse but it's likely it was the cancer. He had a wonderful last few years living his dream

He was the co-owner of Three Point Games, with Wozer. The guy who, with the help of Wozer and community donations, paid the bills and the first among equals when it came to making decisions and getting things done. He developed cancer a year or so before the community fell apart, and it was probably the dire diagnosis combined with the waning popularity of tf2 that drove him to drinking, which led to the community reforming as Digital Nomads under Striker.

After he retired, he moved out into the forested mountains and met a wonderful woman and her two kids. They lived in the middle of nowhere and grew weed and raised her saplings, as he called his adopted children. He was always fond of the Lorax and got to live that sort of life for his last few years. Cancer took more and more from him (he rocked a badass eye patch for a while) but he seemed truly happy every time I heard from him. He lived his dream.

Keep on keepin' on, everybody.

Blizzard is giving away free copies of Destiny 2 for free on their battle.net app for everyone that logs in for the next 2 week. The copies are free to keep forever. Many of us are playing it, so there should be plenty of friends to play with! https://www.blizzard.com/en-us/apps/battle.net/desktop

ChicagoBurdman Jan 29, 2021 @ 11:32am
Wow, I got nostalgic and when hunting for 3PG. I'm absolutely crushed to hear about Kev and Striker. They were both fantastic. I miss so much about the community. It was one of the happier times of my gaming life.

funKy ;) Oct 29, 2020 @ 10:00am
haven't been part of this community for a long ass time but randomly decided to take a look for some reason today. I see that Kevlar and RStriker69 passed away which brought me a great deal of sadness, because they were both unparalleled in their kindness and sharing in joy to a younger UROG and I think back of playing with them very fondly! I hope everyone else that used to play on the modded 3pg tf2 servers back in the day is doing well otherwise! Playing with 3pg when I did got me through a difficult time in my life and I'm thankful to have been a part of such a good wholesome community.

TxSlayer Aug 4, 2017 @ 5:22pm
Well, it appears I have been away for far too long and things have changed a lot around here. I am sad to hear of the loss, almost 2 years ago now, of RStriker69 and sad to see that the TF2 servers are no longer up. Man I have really missed those days and the fun I had with you all. This was the best group and best modded servers anyone could hope to find and play on. I hope everyone is doing well and hope to play some games with yall soon.