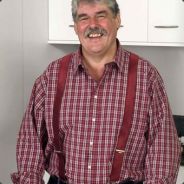 Maybe it’s something to do with age, but I have just realised that we’re already in Winter. Fortunately, my cooking senses have realised this and there’s lots of hearty, comforting Winter food coming up on the show. (But, of course, we don’t all live in cold climates, so there’s plenty to satisfy the rest of you as well. - Words from the man himself.
hueyscookingclub

Hey just a brief biography on our beloved chef "Heuy" ( lain Hewitson ). Born in 1952 to some rands, his life began in a slow paced fashion. In 1972 he moved to Australiam opening a restaurant in Melbourne, however these days his best known of his television involvement with Network Ten. Huey's Cooking Adventures and Huey's Kitchen are ongoing productions featuring fabulous international cusines and recipes. lain spends his elderly years cooking away, in spectacular fashion may i add. His signature dish would most prominently be his spectacular and mouth watering Seafood Risotto. Featuring tropical trout and salmon, caught from the fresh waters of Citarum in west Java, Indonesia. A garnish of herbs and spices, ranging from battered testicles to barbecued testicles and giblets. This dish is heavy inspired from the Testicle cookbook written by the worlds most daring chef Ljubomir Erovic (fantastic work, do a quick google on him). True genius!!!!

Anyways farewell my followers until the next time!

Your comments are much appreciated